Zhou Jieqiong on Her First Acting Role in “Miss Truth” 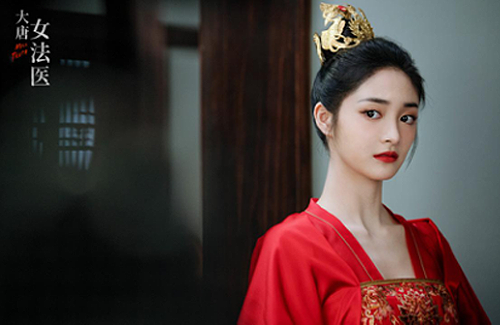 Former Pristin member, Zhou Jieqiong (also known as Kyulkyung 周洁琼), recently made her acting debut in historical Chinese mystery drama, Miss Truth <大唐女法医>. As the drama nears the end of its broadcast, the idol shares her thoughts on her first acting role in a recent interview.

Being an actress has always been Jieqiong’s childhood dream. After her first filming experiences, she realized how success and glory do not come easy for actors. Despite facing many difficulties and challenges, the rookie actress is eager to learn and wants to portray more diverse roles in the future.

With her first acting opportunity being also her first leading role, Jieqiong notes that everything was a new challenge to her. Since she already has significant stage experiences, she points out that the camera is the only thing she is comfortable with. She said, “I am no stranger to a camera. A lot of people watch you when you act.”

With mixed feelings over her performance in Miss Truth, she expressed, “There are scenes that would make me wonder why I didn’t do a better job. If there is another chance, I’ll definitely deliver a better performance. Every project should probably leave some regretful areas, so I could slowly improve myself that way.” In terms of receiving criticism on her performance, the young actress patiently said, “Every single voice is like a test to me. To verify my skills.”

Though it appears she finally achieved her dream in becoming an actress, Jieqiong voices her disagreement and said, “I can only say I just made the first step, so I can’t say my dream has become true yet.” She continued, “I didn’t think much when I wanted to become an actress. I just thought it’s a very dazzling career. I don’t think anyone knows the real struggles behind all that glitz and glamour.”

There was a scene in Miss Truth where Jieqiong jumped into the water and the director requested another take. Since her clothes and hair were already wet, it took a long time to recover and redo the scene again. She said, “It took such a long time, and everyone was waiting. After having this kind of experience, I realized how [acting] isn’t as easy as it looks.”