Bobby Au Yeung and Esther Kwan Promote “Always and Ever” 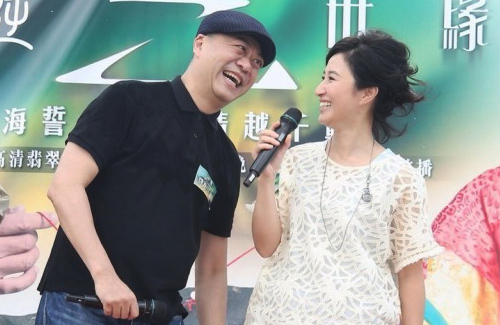 Bobby Au Yeung (歐陽震華) and Esther Kwan (關詠荷) promoted their upcoming drama Always and Ever <情逆三世緣> today. The two were seen on board a sailing ship on to generate buzz for their series’ August 12 debut. Cast members Christine Kuo (苟芸慧), Mandy Wong (黃智雯), Derek Kok (郭政鴻) and Sammy Sum (沈震軒) were also at the event; some dressed in period costumes despite the humid heat.

The ship circled Victoria Harbour, carrying a large banner promoting the upcoming series. Since Always and Ever spans three different time periods, cast members were asked to dress according to their characters’ appearance in the story. To emphasize the series’ love theme, the cast was split up into groups to compete over a game of love confessions. Bobby also contributed to the event’s lively mood with his numerous dirty jokes. When he and Esther were asked to recreate the classic lover’s pose from American film Titanic, Bobby hesitated, saying he is afraid to hold Esther now that he has seen her husband Nick Cheung (張家輝)’s muscular body.

While filming Always and Ever, Bobby was hospitalized for acute pneumonia after swallowing food too quickly at a dinner party. Recalling the incident, Bobby is grateful for the cast and crew’s patience and help during the difficult time, and plans to treat them to a meal to show his appreciation. “You never know what may happen in life. No one wished for it. Hopefully we will receive decent ratings as a thank you to all the artists for their hard work. Everyone was working tirelessly while I was resting, filming with my body double. It took them two days just to complete one scene… I am planning to [treat them to a meal]. It is something I should do….”

When reporters urged him to watch his alcohol intake, Bobby clarified, “That is actually unrelated [to my illness]. It was due to stress and fatigue accumulated over the years. My doctor warned me to not eat too much since I got in trouble when food got into my lungs.”

Esther Kwan also hopes her new series will achieve high ratings. She shared that this was her first time filming a story set in the 1950s, and said that she really likes the era’s fashion style. When asked if husband Nick Cheung (張家輝) would support her by watching the show, Esther said, “He probably will not sit down and watch the whole thing, but would be able to catch some of it. I am actually planning to ask my daughter to watch the show with me this time, and see how she feels about it. When she found out that her mother will die three times, she refused to watch and asked me why didn’t I kill Uncle Bobby instead? It was very funny!”

Asked if daughter Brittany (張童) has ever seen Nick’s films, Esther replied, “Not yet, but it seems like Unbeatable <激戰> was given a category IIB rating. Parents can bring their children to see it. I will tell my daughter to cover her eyes during the fight scenes, and we will watch the inspirational portions together….”