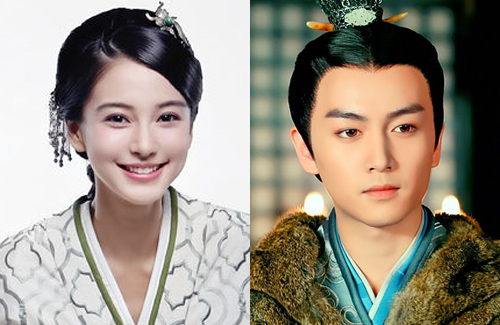 Based on the book of the same name, which is written by popular Bu Bu Jing Xin <步步驚心> novelist Tong Hua (桐華), Yun Zhong Ge ultimately tells of the love triangle between Huo Yunge (Angelababy) and her two suitors. Although mainland Chinese actors Du Chun (杜淳) and Lu Yi (陸毅) are billed as the two male leads, the scenes anticipated most by netizens are those between Angelababy and Chen Xiao.

The preview recognizes this fact, bestowing viewers with eye-catching close-ups of both characters in various scenes. The two become involved when Huo Yunge arrives in Chang’an to look for a man with whom she made a promise ten years earlier. She mistakes Liu Bingyi (Chen Xiao) for her lover, entangling them in an extremely complicated relationship, especially when Bingyi later becomes Emperor Xuan of the Han Dynasty.

Thanks to his appearances in Swordman <笑傲江湖>, a movie adaptation of The Palace <宮鎖沉香>, and the upcoming adaptation of The Condor Heroes <神鵰俠侶>, Chen Xiao has been making headlines throughout the year for his impeccable performances in otherwise lackluster projects. Already production companies are waiting for him to wrap up filming for The Condor Heroes so they can seek him out for collaboration opportunities. His fame will likely continue to spread in the following year, even though he is not necessarily the star of Yun Zhong Ge.