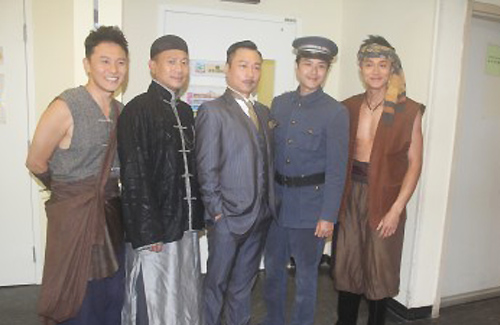 Wayne Lai (黎耀祥), Raymond Wong (黃浩然), Edwin Siu (蕭正楠), Raymond Cho (曹永廉), and Power Chan (陳國邦), the five popular leads in last year’s Qing Dynasty drama The Confidant <大太監> are back together to film an upcoming period drama about life after the death of Empress Dowager Cixi and in the early years of the tumultuous establishment of the Republic of China.

Temporarily titled The Five Eunuchs <太監五虎>, the main cast, along with Nancy Wu (胡定欣), filmed a series of action sequences at a mountainside in Kam Tin earlier this week. Though The Five Eunuchs is not a sequel to The Confidant, the five male leads will reprise their roles as eunuchs, who escape the fallen imperial palace to avoid prosecution by the republican government.

The story takes place immediately after Empress Dowager Cixi’s death. The five eunuchs discover a secret imperial treasure and, disguising themselves as a horse thief, a police officer, a government agent, and a suited-up assassin, the five eunuchs fight each other to retrieve the treasure.

Wearing a pale pinstriped suit and donning a fake mustache, Wayne and horse thief Raymond Wong will undergo a series of close combat fights in the trailer. Nancy also has to fight on horseback to retrieve the treasure, which was in Wayne’s hands.

In addition, Edwin Siu and Raymond Cho, respectively portraying a government official and an iron worker, will play a homosexual couple.

Edwin also confirmed that Aimee Chan (陳茵媺), who portrayed Princess Wo Shek in The Confidant, will be returning to star in The Five Eunuchs. Due to her pregnancy, Aimee is not expected to return until late March 2014 or early April 2014 at the earliest. The actor further disclosed that TVB may consider producing a modern drama, Eunuch 1.5 <太監1.5 >, before filming The Five Eunuchs.