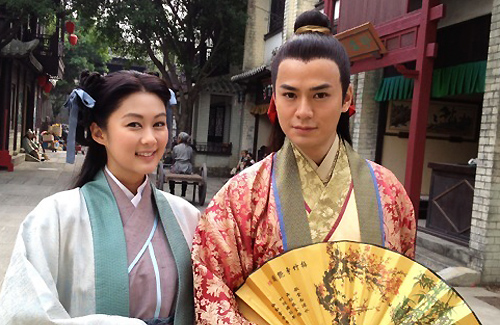 Above: Eliza Sam and Him Law star in “The Vinegar Lady”.

Eliza Sam (岑麗香) is taking up as many job offers as possible so she can have a breather on Christmas day. Asked if she would be spending the Christmas holidays with one of her many rumored boyfriends, Eliza revealed that her mother will be visiting Hong Kong from Canada to spend the holidays with her. Eliza also stressed, “I don’t have a rumored boyfriend!”

Currently shooting her first period comedy drama The Vinegar Lady <醋娘子> with Myolie Wu (胡杏兒), Ron Ng (吳卓羲), and Him Law (羅仲謙), the Canadian born and raised Eliza expressed her difficulty in adapting to the dialogue and filming style of the period drama.

“I have to deal with a lot of new [Chinese] characters, vocabulary, and four-word idioms. I am always worried about speaking out random English words by accident.” Eliza added that she almost uttered profanity once, laughing, “It was very embarrassing of me. There was one scene where I almost spoke profanity, but good thing someone stopped me right before I said the second word. I’ve recited the dialogue over 50 times, but I still had outtakes.”

The Vinegar Lady chronicles the lives of three families who live on the same street. Due to an arranged marriage at birth, the Cho family marries their daughter Cho Ching (Myolie Wu 胡杏兒) to the young Chin Tung (Him Law 羅仲謙), the bastard son of vinegar factory owner, Chin Chong (Koo Ming Wah 古明華). Ching is best friends with Kai Jun (Ron Ng 吳卓羲), the heir of a public bath house that is stationed on the same street as Chin’s vinegar factory.

Meanwhile, Chin Tung’s maid and assistant, San Zah (Eliza Sam), falls in love with Tung. She becomes his concubine and competes with Ching for Tung’s affections.