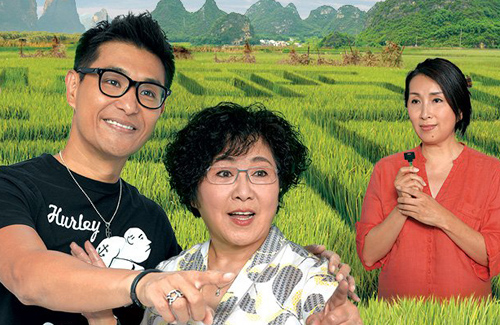 TVB modern drama, Reality Check <心路GPS>, is in its final week and viewers are anxious to see the fate of its characters. Several pivotal scenes this week attracted viewers, achieving a high rating that peaked at 31 points. Netizens are praying that TVB will avoid delivering the standard happily-ever-after ending and deliver a satisfying ending during this Friday’s two-hour series finale.

In the show, Louise Lee’s character, Lau Chui Wan, is a gambling addict and a lenient mother to her children. Her biological daughter, Wah Lui, played by Rachel Kan (簡慕華), and son Chung Jai, played by Owen Cheung (張振朗), prioritized money over their mother’s welfare. It is reported that Wah Lui and Chung Jai will face consequences of their greed. Chung Jai will be lectured by Chui Wan for his wrongdoings. Wah Lui’s husband will lose all of his life savings in stock bets and she will even be beaten in public.

Summer will rescue Wah Lui by paying off her debt using the $400,000 HKD that Chui Wan gave him earlier. After these events, Chui Wan learns her lesson and will no longer spoil her children. Chui Wan will ultimately choose to live with foster son Summer, who finally acknowledges his birth mother Ha Siu Han. The finale is reported to be a happy ending, in which Summer will dance with both his foster and birth mothers.

Louise Lee’s pivotal scene during Monday night’s episode earned many viewers’ sympathy and also boosted the show’s ratings. In the scene, Chui Wan was robbed and hit repeatedly in the face. Netizens complained that TVB used too much make up, making Louise appear overly bruised. Louise laughed and said that she watched the scene on her 50-inch television at home and thought she looked “very beaten up”.

Louise was happy that the scene generated buzz, and would be glad to be hit a couple more times for even higher ratings. Louise commented that she enjoyed playing a gambling addict, as the role was well-written and very realistic.