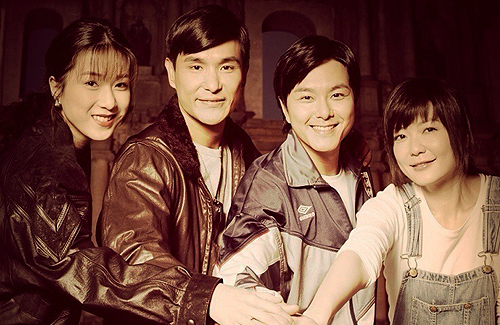 With the two-hour finale of Brother’s Keeper <巨輪> airing on Saturday, November 2, what will be the fate of Ruco Chan’s controversial character once he leaves prison? Leaked spoilers reveal that Sam (Ruco Chan 陳展鵬) unwillingly becomes involved in the kidnapping of his brother, Wai Son (Edwin Siu 蕭正楠). Rachel (Linda Chung 鍾嘉欣) misunderstands Sam’s intentions and calls the police to arrest him, with Sam taking a bullet in the resulting crossfire.

Sam Becomes Involved with the Triads

Sam was imprisoned for seven years after he was found guilty in obstruction of justice, misconduct as a police officer, and conspiracy in murder. While in prison, Sam was ostracized by his family and Rachel due to his wrongdoings.

Finally completing his prison sentence in 2013, Sam faced a bleak future and could not find work. He helps recover a lost wallet for a man named Fa Sa Keung, who arranges work for Sam. It turns out that Fa Sa Keung works for triad boss Leopard, and is under the wing of drug lord Ghost. Now adopting the name of Law Bo, Sam continues to think about his family and Rachel, and watches them from a distance.

While Ghost is away in Thailand on a ketamine drug deal, Leopard concocts a scheme to kidnap Wai Son. Leopard needs the $50 million HKD ransom to replenish ketamine supplies he had stolen from Ghost to pay back gambling debts. Leopard picks Sam as the driver, but does not tell him about the kidnapping scheme.

Wai Son hires a private investigator, who confirms that Sam assumed the name of Law Bo and now works for the triads.

Rachel is crestfallen when she realizes Sam’s involvement in the kidnapping. She wonders if Sam was driven by revenge. When Sam appears at his mother (Louise Lee’s) birthday dinner and has a scuffle with Wai Son, Rachel calls the police to protect Wai Son’s safety. Although Sam escapes, the police follows on his trails.

To extricate himself from the triads, Sam decides to have Ghost and Leopard destroy each other.  He leaks Leopard’s whereabouts to Ghost, while telling Fa Sa Keung that Ghost has discovered their hideaway.

Inspector Mandy Yeung (Becky Lee  李璧琦) has been investigating the ketamine drug ring and successfully arrests Leopard. Concerned that the storage location of his ketamine supplies would be leaked, Ghost transports them to another site. Mandy follows Ghost to a warehouse and attempts an arrest. Ghost almost escapes, but Sam grabs his gun.

At this time, a police officer from another precinct arrives on the scene and shoots Sam. The officer had acted on Rachel’s call that Sam may harm Wai Son’s safety. Taking a bullet, will Sam be able to survive or will he meet his death?

Producer Amy Wong (王心慰) did not directly reveal the fate of Ruco Chan’s character, but she said that the romantic outcome between the main characters will be decided by the audience. The ending will be open-ended and make viewers think whether Rachel chooses Sam or Wai Son, and with whom Ying (Kristal Tin 田蕊妮) settles down with. Amy Wong said, “Between love and loyalty, how will they choose?”