Grace Chan Has No Time to Rest 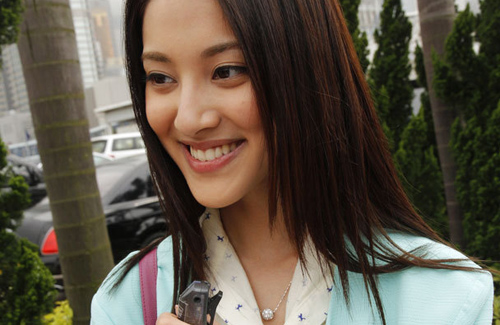 Rookie actress Grace Chan (陳凱琳) starred in three dramas back-to-back since winning Miss Hong Kong 2013. Last year, the 23-year-old made her acting debut as Wayne Lai’s (黎耀祥) younger sister in the TVB anniversary drama Overachievers <名門暗戰>, earning positive responses for her performance. As one of TVB’s top promoted newcomers, Grace said she must learn how to fight for the chance to rest.

Her second drama, Quid Pro Quo <四個女仔三個Bar>, is set to premiere on January 26. Asked if she felt any pressure acting as the female lead, Grace insisted that she was not the only lead, explaining that all the ladies in the series have equal screen time.

Currently filming time-traveling drama Captain of Destiny <張保仔>, Grace revealed that there is still one more month of filming left. Afterwards, she will have to prepare for her new series, The Vampire <殭>. Filming in Hengdian for the first time for Captain of Destiny, Grace said it was so cold she used six heat packs in a day. Asked if she had any time to rest, she said, “I rested well when I was in Hengdian because I didn’t have to work every day.”

Miss Hong Kong 2013 second runner-up, Moon Lau (劉佩玥), also stars in Quid Pro Quo. She is very nervous about the drama, as it is her debut series. She is thankful to have seniors such as Ram Chiang (蔣志光) to guide her during filming, which has calmed her nerves significantly.

“Although it’s my first time filming a drama, I tried my best. I am very open to criticism as it is a very important part of the learning process. I give myself 70 percent,” said Moon when asked to grade her performance.

Also confirmed to star in The Vampire, Moon will cut off her long hair for her role. Portraying a mature and cool assistant, Moon said her role is completely different from her real-life self.

21 comments to Grace Chan Has No Time to Rest