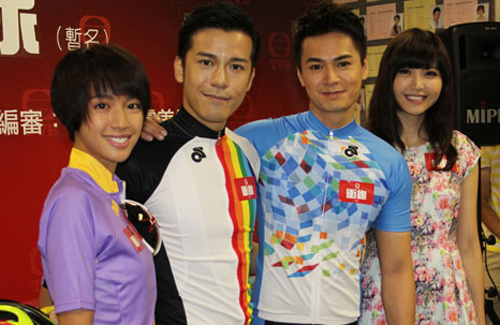 The 20-episode idol drama will discuss about generational differences between the people of Hong Kong. There will be location filming in Taiwan for three weeks in September. Sisley added that the style of Cross the Finish Line will have a similar feel to Taiwanese idol dramas.

Him Law Doesn’t Need to Stuff His Crotch

Portraying the role of a road cyclist, Him Law spent two months training on a road bicycle. “I never did this kind of cycling so it’s easy for me to lose control. My legs are completely scratched up. By the time filming begins, I’ll need to cover them up with foundation. At least my face is fine.”

Having to wear tight shorts which reveal his figure, Him was asked if he felt embarrassed or exposed. “I do feel that way a little bit, because you can’t wear any underwear under these shorts. However, the padding is very thick. It’s like wearing swimming trunks.” Asked if he would be adding some extra stuffing in his pants for “heightened” effect, Him laughed and said, “No need to! The padding is thick enough!”

Cross the Finish Line is Him’s first drama as the first male lead. His character would be involved in a sticky love relationship with Jinny Ng and Sisley Choi

Securing her first lead role in a television series, Sisley Choi expressed her anticipation for Cross the Finish Line. For her athletic role, Sisley did not regret chopping off her long locks. Her new hairstyle is lower maintenance and feels very refreshing and relaxing. “This actually isn’t my first time with short hair. I had it when I was in high school,” she revealed.

Jinny Ng will be portraying Michelle Yim’s secretary. Jinny said she is grateful for the opportunity to work with a senior in her debut series. Her character will be involved in a relationship with Him Law, but asked if she would be having any intimate scenes with him, Jinny said, “I don’t have enough guts for that!” Does she know Him Law has a girlfriend? “I do. I thought that has gone public?”

Jinny admitted that likes muscular men. “My ex-boyfriends have all been pretty muscular. I like mne with athletic built, because their chest seems very big, and it gives me a sense of security.” Would Jinny use this opportunity to admire all the handsome men in the series? She laughed, “Why not?”

41 comments to Him Law and Sammy Sum Star in TVB Idol Drama, “Cross the Finish Line”