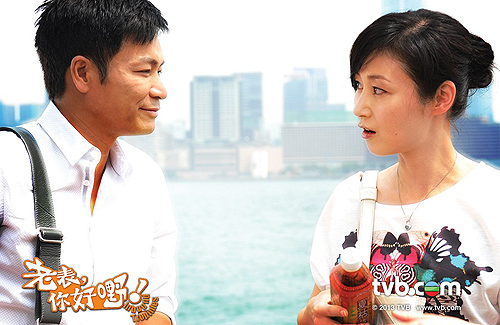 Wong Cho Lam’s (王祖藍) first venture into scriptwriting TVB series, Inbound Troubles <老表,你好嘢!> has been a welcome addition because its comedy relief is like a breath of fresh air, following the broadcast of heavy-handed dramas, Highs and Low<雷霆掃毒>, The Confidant <大太監>, and Silver Spoon, Sterling Shackles <名媛望族>. Spoilers for the Inbound Troubles have already been revealed and it looks like the series which started off as a comedy will wrap up with an emotional ending.

Ng Ka Yee (Roger Kwok 郭晉安) and his girlfriend Ma Shuk Jing (Angela Tong 湯盈盈) have plans to get married after Roger is cleared of his bankruptcy filing. Unfortunately, after a major argument, Shuk Jing gets drunk at a bar and has a one night stand with Ka Yee’s good friend and colleague, Ching Shiu Shan (Bob). Ka Yee catches the two of them in bed and painfully breaks up with Shuk Jing. Bob, feeling guilty for what happened, resigned from the travel company and begins a relationship with Shuk Jing.

Bob ends up borrowing money from a loan shark due to his failed business and eagerness to please Shuk Jing. However, without means to repay the loan, Bob decides to kidnap the rich cousin from mainland China, Cai Xin (Wong Cho Lam 王祖藍), for ransom. Because Ka Yee’s new girlfriend, Yick Suet Fei (Joey Meng 萬綺雯), happened to witness the kidnapping, Bob has no choice but to capture her as well. Ka Yee worked together with Cai Xin’s dad to save Suet Fei and Cai Xin while the cops arrest Bob who is ultimately sentenced to jail.

In the end, Suet Fei is touched by Ka Yee and agrees to marry him. The couple ties the knot while Cai Xin also successfully expresses his love for his cousin Ng Tsz Ching (Ivana Wong 王菀之). Shuk Jing, who finally realized her own faults, decides to wait for Bob to finish his jail sentence, in a series ending that is both emotional and touching.

When asked about the spoilers, Bob continued to thank Wong Cho Lam and producer Wong Wai Sing (黃偉聲). “When you read a magazine, the actors generally don’t spill the spoilers, so please don’t joke with me. I just want to thank Cho Lam and Wai Sing for giving me this opportunity to be a part of the series.”