Kate Tsui Reveals Lesbian Romance in “The Battle of Tomorrow” 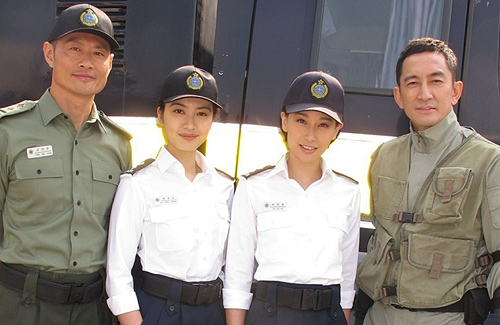 Not only will Kate Tsui (徐子珊) challenge a twenty-year age gap to win over Lawrence Ng (吳啟華)’s affections, she must also deflect unwanted attention from a woman in her upcoming prison drama The Battle of Tomorrow <再戰明天>.

A boyish personality packaged in a feminine physique, Kate has won over men and women alike and became TVB executives’ top choice when casting for unique and gritty roles. Different from other Miss Hong Kong winners, she successfully shed the stereotypical “flower vase” image early in her career. She has been credited with a wide spectrum of roles, and each one memorable due to her hard work and professionalism. Whether playing a tomboy police cadet, a tragic drug queen, or a sexy, modern-day career woman, Kate brings her best to the table every time and never says no to new challenges.

Her adventurous spirit certainly gives her an edge as TVB attempts to bring freshness to their drama productions. Although she was already paired with Nancy Wu (胡定欣) in Midas <點金勝手>, Kate will once again be involved in a lesbian plot line in The Battle of Tomorrow. At the series’ blessing ceremony on January 27, she revealed that Harriet Yeung (楊詩敏) will be featured as a prisoner who harbors a secret crush on Kate, an officer of the Correctional Services Department. After Kate rejects her advances, Harriet falls into a deep depression and sadly attempts suicide.

With ample practice while on the Midas set, Kate is now more relaxed about the possibility of kissing another woman, saying that she would not mind doing so with Harriet. Her bigger concern however is probably her romance with Lawrence Ng. With many remarking that the pair looks more like father and daughter, Kate and Lawrence face the tough task of making their love convincing on-screen.

Luckily, Lawrence is confident in Kate’s abilities and has nothing but praise for his new leading lady. Lawrence said, “Kate has always done well in her past performances, and is reminiscent of a younger Ada Choi (蔡少芬).”