Kay Tse and Kevin Cheng Friendly on “The Vampire” Set 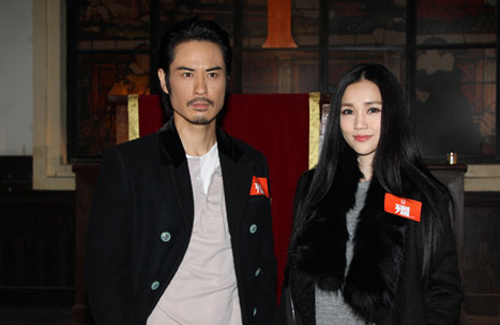 Dispelling earlier rumors of not getting along, Kay Tse (謝安琪) and Kevin Cheng (鄭嘉穎) were recently spotted happily laughing and chatting together while filming for TVB drama The Vampire <僵>.

Featuring a supernatural theme and helmed by a refreshing cast combination consisting of Kay, Kevin, Wong You Nam (黃又南) and Grace Chan (陳凱琳), The Vampire is already generating buzz.

Working together for the first time, Kay and Kevin were rumored to dislike and treat each other with hostility despite having to play an onscreen couple. These rumors were denied by both parties and appear to have been proven untrue given the latest sightings of Kay and Kevin on the filming set..

While the scene being filmed that night was not any of the kiss scenes Kay and Kevin had previously revealed would be included in the drama, it was still an emotionally intimate and sweet scene centered on Kevin’s character attempting to comfort Kay’s character by the sea.

When on a break from filming, Kay and Kevin frequently engaged in light-hearted banter and looked like they were having a good time as friends. There was absolutely no tension in the air, and there seems to be no basis for the earlier reports claiming that they did not get along.