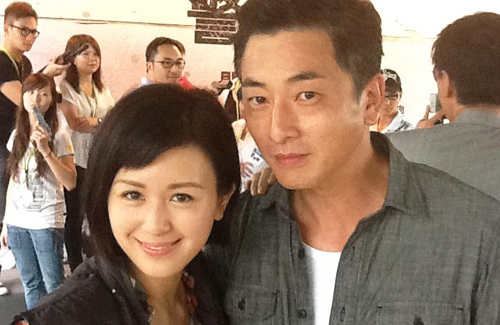 Earlier this week, Leila Tong (唐寧) was spotted attending a seminar by teacher Thich Nhat Hanh, a Vietnamese Zen Buddhist monk, at the Hong Kong Coliseum. Leila explained that although she is not religious, she has become a new student of Buddhism and has been practicing the religion ever since joining Alain Yip’s (葉青霖) sharing group. “I do meditate at home now. It’s been several months now. I have not taken refuge (in the Triple Gem), but I do find meditating to be a great way to calm my body and clear my mind.”

The former TVB actress signed with HKTV last year, filming two HKTV dramas back to back – Marvel Century<驚異世紀> and Police Boundaries <警界線>. Due to the Hong Kong’s government delayed approval for the upcoming station’s broadcast license, HKTV decided to market their dramas to the YouTube and Facebook audience for the time being.

The first five minutes of Brain Detective <開腦儆探>, starring Felix Wong (黃日華), was released online on May 24. The next day, HKTV unveiled five minutes of Once Upon a Song <童話戀曲201314>, starring William So(蘇永康) and Bernice Liu (廖碧兒). On May 30, eleven minutes of Police Boundaries will premiere online.

“Many friends are sharing the clips, and I also shared the videos on Facebook. I hope that this will convince the government to pass out the free license. I will be shooting my third drama [with HKTV] soon. As long as I find the drama suitable, I will film it. [HKTV] has a lot of freedom.”

It has been reported that Leila will film HKTV’s grand opening drama, Flow of the Years <歲月樓情>, which also stars Felix Wong, Ha Yu (夏雨), and Paw Hee Ching (鮑起靜).