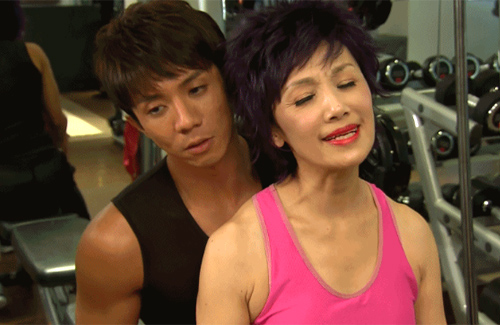 In the currently-airing comedy, Come on, Cousin <老表, 你好hea!>, Louis Cheung (張繼聰) and Mary Hon (韓瑪莉) will have a sexually passionate older-woman, younger-man relationship.  At first, the pair was hesitant to accept the roles in the drama because they were afraid of negative public reaction. Mary teased that her scenes with Louis were not intense enough. While Louis goodheartedly joked that he enjoyed the role of a “soft rice king,” who lives off women’s money in the series.

Mary Hon stars as the flamboyant rich wife of Bowie Wu (胡楓) and falls in love with Louis Cheung, who portrays a fitness coach in the series. During a scene, Louis’ character uses his six-pack abs to play a drinking game to seduce Mary. This scene was added because Louis suggested the idea himself.

Shirtless for the Sake of Art

Louis has received a lot of compliments about his fit physique in Come On, Cousin. Mary pointed out, “He began training his body nine months before filming. Even during filming, he only ate boiled chicken because he was scared of losing his fit figure. It was really difficult [for him]. One day, he actually threw up and his face was really pale. He still insisted on continuing to film! Everyone told him he needed to rest.”

When teased about costar Ivana Wong (王菀之) saying that he always voluntarily took off his shirt, Louis responded, “Only because it was necessary for the drama!”

Speaking about the older-woman, younger-man relationship in the drama, Mary stated, “Actors don’t have bottom lines. This time with Louis, we could’ve been more passionate! But we were worried about the audience’s reaction.”

Louis’ income disparity with wife Kay Tse (謝安琪) is often the topic of gossip reports. Louis does not mind. “There is definitely a difference between my wife and my income. All the money I earn goes into her account, so of course she has more money than me!”