“Loved in the Purple” Synopsis 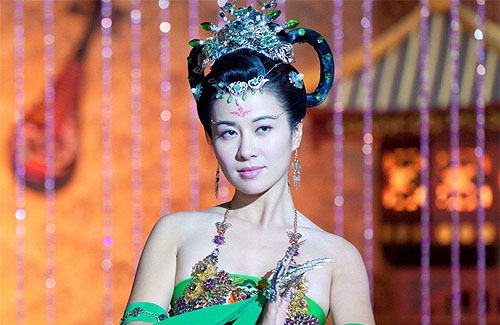 Michelle Ye (葉璇) and Raymond Lam’s (林峯), much-awaited drama, Loved in the Purple <紫钗奇缘>, will broadcast on September 4 on TVB Jade. Loved in the Purple marks the return of the beloved duo since a decade ago in Lofty Waters Verdant Bow <雲海玉弓緣>. Many fans are rejoicing in anticipation as they eagerly wait for Michelle and Raymond’s onscreen chemistry.

The story stems from the classic play The Purple Hairpin <紫釵記> and takes place in the Tang dynasty where Nalan Dong (Raymond Lam) is forced to abandon his title of a royal prince. Nalan Dong then takes on the name of “yellow-clothed hero” as he was the residential hero who offered help to the commoners. Nalan Dong encounters Li Yi (Cheng Cheng 程誠) and quickly become good friends, accompanying each other as they head to Chang’an.

While in Chang’an, Nalan Dong meets the beautiful dancer, Huo Xiao Lu (Michelle Ye) and is instantly mesmerized by her. He sees her wearing the purple jade hairpin and recognizes that she is the woman that was initially betrothed to him. Nalan Dong attempts to confirm his speculations but unfortunately faces many problems on his journey.

On the night of the lantern festival, Xiao Lu accidentally drops her hairpin and when Li Yi gives it back to her, she believes that he is her true knight in shining armor. As the pair falls in love at first sight, Nalan Dong is left in the dust and heartbreakingly gives his blessings.

On the other hand, the emperor, knowing that the eldest son is selfish and evil, searches for Nalan Dong in hopes that he will help him guard the kingdom. And when the empire gives Nalan Dong the duty of spying on the Turks, Xiao Lu goes in his place instead. Soon, the enemy kidnaps Xiao Lu and it is up to Nalan Dong to save her. However, before Nalan Dong can reach her, the daughter of an imperial general, Lu Jing Lan (Tammy Chen 陳怡蓉), steps in and rescues Xiao Lu.

As sworn sisters, Xiao Lu realizes that Jing Lan is in love with Nalan Dong, therefore she acts as a matchmaker between the pair. Nalan Dong rejects the marriage offer immediately as he is still in love with Xiao Lu, unbeknownst to her.

The prince falls in love with Xiao Lu’s beauty and immediately asks for her to become one of his wives. Upon rejection, the prince is angered at Nalan Dong for taking her away; therefore, he works together with Jing Lan’s father to frame the Nalan Dong. Eventually, after a misunderstanding created by Jing Lan’s father, she is forced to marry Li Yi despite lack of mutual love.

The emperor falls ill and as the prince rises in power, he orders a death sentence for Xiao Lu. The kind-hearted Jing Lan finds evidence to prove Xiao Lu’s status as a real princess and narrowly escapes being killed. After many unsuccessful attempts of killing the couple, Xiao Lu and Li Yi eventually end up together, and Nalan Dong gives a final blessing as he retires and leaves the city.

60 comments to “Loved in the Purple” Synopsis