Michael Tse Thinks of Ways to Be Kissed by Niki Chow 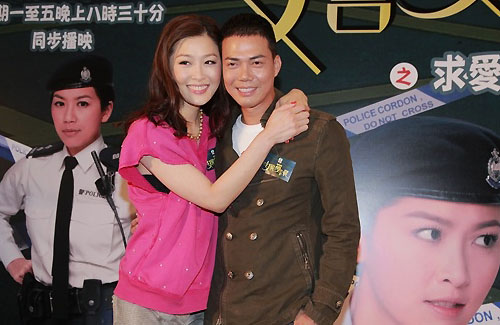 On March 28, the cast of Sergeant Tabloid gathered together to promote for the drama’s upcoming finale episode, which will air next week. Niki Chow (周麗淇) took the initiative to sit on Michael Tse (謝天華)’s lap on stage and fed him grapes like a Greek goddess.

How did it feel to have Niki sitting on him? Michael said, “It was okay; pretty comfortable! Her legs are soft and her skin is smooth,” he joked.

“[Michael] ‘took advantage’ of me! I wanted to yell, but I wasn’t allowed to make noise because of the game!” Niki exclaimed.

Although rumored to have reconciled with her ex-boyfriend, Eric Cheuk, the 33-year-old actress admitted that it has been a while since she last sat on a man’s lap. “I do have some pursuers; it’s just that [they] weren’t right for me!” Has her elder sister, Kathy Chow (周汶錡), introduced her to some new friends? Niki responded, “She was probably influenced by all the media reports! She is tempted to introduce me to some, but I told her not to worry. Although I’m not very good at handling my relationships, maybe it will suddenly come to me!”

In response to Niki feeling violated by his wandering hands, Michael laughed, “How often would people take advantage of her? I only touched her jeans! But she’s gotten lighter. Maybe she is on a diet for a slimming endorsement?”

Michael also revealed, “Next week will be [Sergeant Tabloid’s] finale. If the ratings go past thirty points, Niki Chow said she would kiss me. I would get to choose where she kisses, but I haven’t decided yet!”