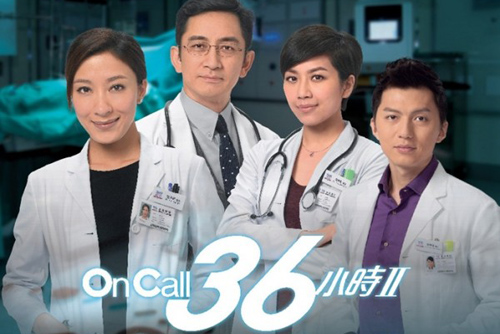 Labeled as one of this year’s TVB anniversary series, The Hippocratic Crush 2 <On Call 36小時II> hopes to catch greater audience attention than its successful first installment. The drama will be broadcast in Hong Kong and relative overseas countries starting Monday, November 4. Producer of the drama, Poon Ka Tak (潘嘉德), shared intriguing spoilers regarding the drama’s continuous plot developments, which consists of many tragic moments.

The sequel will continue with Cheung Yat Kin (Kenneth Ma 馬國明) and Fan Tze Yu’s (Tavia Yeung 楊怡) loving relationship as a married couple. Tze Yu becomes pregnant and Yat Kin worries for her health, since she still suffers from her intramedullary spinal cord tumor. Nonetheless, Tze Yu tells her husband to relax and have some fun instead of directing all his energy on her. Loving his wife tremendously and unable to rid himself of all the pressure, Yat Kin eventually develops severe anxiety.

Pathology specialist, Dr. Lok Man Sang, is also a long-term sufferer of cancer. Having witnessed tragic events throughout life, including the death of his parents and wife, he remains indifferent about his illness and only takes medicine to maintain control. After gradually falling in love with Heung Chin Yi (Tracy Chu 朱千雪), Dr. Lok finally decides to properly heal his illness under her influence.

Producer Poon revealed he decided to cast Tracy, because Lawrence’s character needs to be paired up with someone. It is a bad idea to add a third party into Yat Kin and Tze Yu’s relationship, since the couple had experienced a lot of hardship in order to end up together. Furthermore, fans would surely protest against the idea of having their favorite couple separated. Casting Tracy alongside Lawrence was therefore a good option. “I always like it when veterans collaborate with the new people,” Producer Poon explained. He made sure Tracy dropped her pretty Miss Hong Kong image to portray a simple-looking woman.

Dr. Lok faces much turmoil, including his rivalry with Yat Kin and strained relationship with younger sister-in-law, Suen Man Yuet (Louisa So 蘇玉華 ). Man Yuet despises Dr. Lok for his irresponsibility, because he did not hold a funeral for her sister and chose to vanish instead, leaving his daughter behind as well.

Che Hiu Tung (Eliza Sam 岑麗香), is a friendly and outgoing social worker who loves to help others. She falls in love with Yeung Pui Chung (Him Law 羅仲謙), but eventually dies from glioma. Producer Poon shared, “Eliza’s death scene made me cry uncontrollably each time I watched it. Him’s crying was so sad and desolate.”