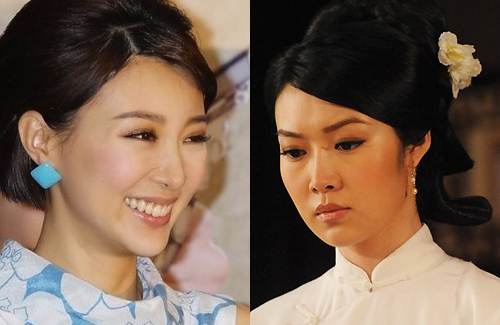 TVB’s major productions Beauty at War <金枝慾孽貳> and Bullet Brain <神探高倫布> both earned surprisingly low ratings of 23 points last week. The dramas received many viewer complaints for their confusing story lines and inappropriate scenes. Tracy Ip (葉翠翠) and Sire Ma (馬賽) were both heavily criticized for their acting in the dramas, with some viewers faulting the two for ruining the series. Despite the negativity, Tracy and Sire accepted the criticism and vowed to make improvements in the future.

Tracy, who plays palace wet nurse Shu Lan in Beauty at War, was criticized for her bland acting skills and poor recital of dialogue. Netizens commented that Tracy spoke her lines very unnaturally and blamed her poor performance for “dragging down the whole show”.

At an event today, Tracy agreed with the criticism and described the challenges she faced while filming the drama. “I understand that I must accept different opinions if I want to improve. My friends told me they didn’t understand what I was saying at all during the first episode. That was the very first scene I filmed after I joined the cast and I didn’t have a good grasp [on how to act]. I also received the script very late. Reading the classical Chinese dialogues drove me crazy! I had to go to the Chinese doctor three times. I couldn’t eat nor sleep well and lost 10 pounds”. Tracy also shared that it was her first time playing a villain, and felt her performance was average at best.

Sire Ma also received many negative comments about her role as Eva in Bullet Brain. Viewers found Sire’s performance dull and her accented Cantonese distracting. Audience also disliked the boring story and found it confusing, many even called for TVB to cancel the show.

Addressing these comments, Sire believes she has put in her best efforts and saw the series as a welcomed challenge. “I don’t have much experience yet, plus [the series] used a new format this time. I have already done my best and have no regrets. I can’t control the ratings or the viewers’ reactions. Netizens want to cancel the show? That decision is not up to us. I find this series very new and refreshing. It was also a big challenge for me. I was under a bit of pressure because of all the sentimental scenes.”