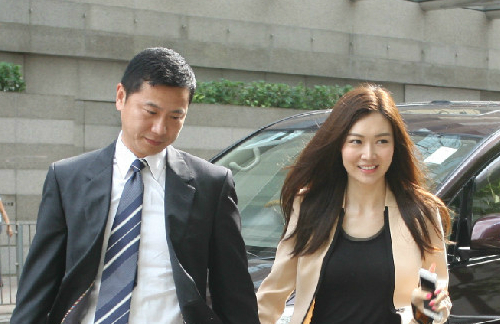 On July 11, TVB actress Tracy Ip (葉翠翠) officially tied the knot with her architect boyfriend, Raymond Zhou (周曉東). Despite having a joyous wedding ceremony, an anonymous source spilled to the press that Raymond’s ex-wife planned to institute legal proceedings against him regarding the custody and living expense of their daughter. Thus, Tracy and Raymond were reportedly unable to go on a honeymoon as the lawsuit took place on July 16.

According to the source, Raymond cut down his daughter’s living expense and threatened his ex-wife that he would fight for her custody. Raymond’s ex-wife thus allegedly scheduled the family lawsuit early on purpose, in order to shatter the lovely atmosphere of his new wedding.

After their divorce last year, Raymond’s ex-wife received half of his net worth and took a long hiatus from work. During this time, she requested that Raymond raise their daughter’s living expense to $25,000 HKD per month. After much quarrel, Raymond agreed to provide his daughter $19,920 HKD per month, not including her school fees. Once his ex-wife returns to work, he would provide the initially settled amount of $9,350 HKD per month. However, Raymond’s ex-wife reportedly did not inform him when she found a new job back in May. Refusing to reveal her income status, Raymond decided to drop the living expense to the original $9,350 HKD.

Although Tracy accompanied Raymond into the high court on July 16, she was seen exiting the building soon afterwards. According to reports, Raymond’s ex-wife objected to having others hear the proceedings. When the trial ended, Raymond’s ex-wife departed via a separate pathway in order to avoid running into Tracy. The following trial is currently scheduled to be held in September.

Tracy expressed to reporters that her happy wedding mood was unaffected by the legal proceeding. In fact, she and her husband cherish each other even more now and will always give mutual support. While holding her husband’s hand, Tracy laughed and expressed that she will prepare soup for him to alleviate his pressure.