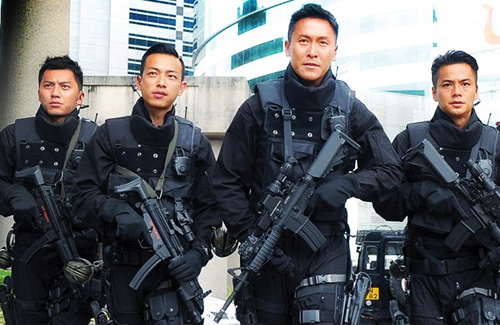 Since the airing of Tiger Cubs 2 <飛虎II> last Sunday, TVB’s weekend lineup has an added measure of excitement. Joe Ma (馬德鐘), Him Law (羅仲謙), Oscar Leung (梁烈唯), and Benjamin Yuen (袁偉豪) reprise their roles as members of SDU’s A Team, taking down terrorists and going on missions that are deemed too dangerous for regular police.

Joe Ma portrays Senior Inspector Chin Hon To, a strict but caring leader to SDU’s A Team. Joe’s character maintains the team spirit and acts as an elder brother. “Not only do I have to train the new SDU officers; I also have to solve cases. It was a challenge to my physical and mental endurance.”

“After shooting the first one, I thought I was done. When the series was released, I remember how much the brothers have suffered together to make the series a success. I don’t mind playing Chin Sir again as long as people still want me to.”

Less Shirtless Scenes for Him Law

Him Law, who portrays A team assaulter Yu Hok Lai, became a hot topic of discussion in various topless scenes in the sequel. Him said he will not have many opportunities to show off in the sequel, expressing that the focus of the series should not be on their bodies. “I was too big in the last series. In the end, it didn’t make me look as agile as what a SDU member should be. For the sequel, I did not build up myself as much so it’ll look more pleasing on camera.”

Tiger Cubs 2 proved to be a risky filming experience for Him, who had to be hospitalized briefly after an injury during an action scene. “A piece of glass jabbed into my leg. I didn’t realize it until I saw a lot of blood.” Despite the numerous injuries, Him and the cast grew very close and their loyalty to each other was apparent in their performances. “I hope viewers can see all the effort and hard work we put in the series.”

Portraying a sniper for the SDU, Oscar did not have many action scenes in the first series. Among the cast, he had the most relaxing time. “I was only in charge of sitting on rooftops and shooting down criminals with my perfect aim. I looked cool, but in the second series, I will have a lot more action scenes.”

Oscar revealed that his character, Chong Cheuk Yuen, will experience obstacles in his life. “I have several crying scenes. They were challenging because I had to be more subtle. I demonstrated three different ways to cry, and in the end, we settled with the manlier version. As an actor, we should branch out and not settle with only one type of performance.”

Benjamin Yuen has a Relationship with Joe Ma

Benjamin Yuen portrays Tse Kar Sing, an aggressive assaulter in the A team who often creates friction among the team members. Although Benjamin seems to be the odd one out of the lot, he said the cast members are very close in real life. “It has been two years since the last one, and we’ve all matured, including our characters. It was a difficult two months, but we all went through it together.”

Among the SDU members, Benjamin felt that he looked the least fit. “I didn’t have time to bulk up because I had other projects to film before Tiger Cubs 2.  However, this series will emphasize more on the plot than our looks. I hope everyone will notice that.”

This article is written by Scarlett for JayneStars.com.