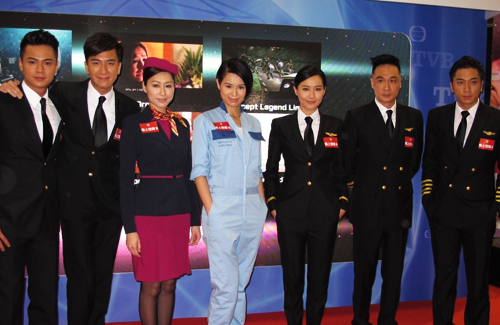 TVB once again dominated FILMART 2013 on Tuesday, bringing in over 32 top artistes from upcoming drama productions to meet the press at the industry trade show. Veteran actors Francis Ng (吳鎮宇), Esther Kwan (關詠荷), and Bobby Au Yeung (歐陽震華) were in attendance, dressed in full costume to promote their upcoming series.

Attendees were treated to sneak previews of highly anticipated dramas such as Beauty At War <金枝慾孽-貳>, Triumph in the Skies 2 <衝上雲霄II>, Bullet Brain <神探哥倫布>, and Always and Ever <情逆三世緣>. TVB continues the recent trend of using “heavy flavor” scenes to boost viewer interest. The trailers showed Natalie Tong’s (唐詩詠) bare back in Bullet Brain, while Joyce Tang (滕麗名) exposed her bra in Awfully Lawful <熟男有惑>.

Sheren Tang (鄧萃雯) and Moses Chan (陳豪) attended the event to promote Beauty At War, the long-awaited sequel to 2004’s War and Beauty <金枝慾孽>. Sheren appeared healthy and fully recovered from her earlier emotional breakdown. She recalled feeling worried about her condition, but luckily she was able to quickly recover due to early detection. When asked if she will be more selective about her roles from now on, Sheren implied she will consider all scripts as long as they are complete prior to filming. She stated that she will choose projects based on interest. As a result she will film less often and will not have time to film for TVB.

Moses Chan was recently caught using an English word in 2003’s Perish in the Name of Love <帝女花>. Moses, portraying Ming dynasty emperor Chongzhen, commanded, “Help me ‘check’ it”. The clip generated many views online and Moses became an instant laughingstock. Moses appeared embarrassed when asked about this incident. “I’m really sorry. I didn’t notice the mistake at the time. I will be more careful in the future.”

Bobby Au Yeung, who was earlier hospitalized due to acute pneumonia, looked healthy and cheerful at the press conference. Many friends and colleagues checked on him throughout the day, including Francis Ng. When asked about Bobby, Francis joked using his unique sense of humor.,”I am planning to bow to him. I was going to give him two more bows [like at a funeral], but I will bow just once today to wish him good health. Everyone should treasure their health.”