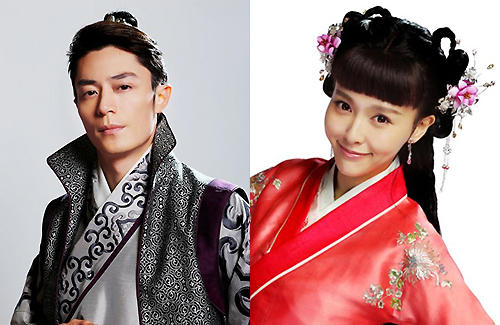 The ancient drama Perfect Couple <金玉良緣>, starring Wallace Huo (霍建華) and Tiffany Tang (唐嫣), recently began filming in Hangzhou. After their collaboration in Chinese Paladin 3 <仙劍奇俠傳3>, the two have become an ideal couple in the eyes of fans, especially since both are currently single. However, while Wallace shared that he appreciates his friendship with Tiffany, it is unlikely that the two will enter into a real-life relationship.

Perfect Couple will be Wallace’s first attempt at acting in and producing a series after the establishment of Huajae Studio, his own production company. When asked why he wanted to go into producing, Wallace replied that he was trying to pave the road for when he gets older. “In the future, I don’t want to act in so many dramas each year,” he explained. “I want to find my own subject material and act in what I want to act.”

Tiffany, who also has her own production company, shared that she gleaned a lot of business knowledge from Wallace, such as the idea of building a foundation for oneself as a producer. She added that, in the five years since they last collaborated, Wallace has become livelier and more easygoing, although he is very serious when it comes to work.

Since her messy breakup with Taiwanese actor Roy Chiu (邱澤), Tiffany’s love life has been at a standstill. Although Tiffany said she is currently focusing on work, she also revealed she is still waiting for her perfect match to find her, though she knows that perfect couples cannot be found at random.

During an interview about Perfect Couple, reporters brought up the possibility of Wallace and Tiffany becoming a couple in real life. The two of them laughed in response, with Wallace joking, “Us two? Would she like me? She’s very picky when it comes to type. I’m not her type.” When asked what type of man Tiffany prefers, Wallace replied that she goes for handsome guys, which eliminates him, since he considers his appearance as only “tolerable.” Tiffany was quick to add that Wallace was “too excellent.”

Wallace went on to say that if he and Tiffany had had feelings for each other, they would have acted on them five years ago, rather than wait until today. Nevertheless, they still have good chemistry together, and he cherishes their friendship: “We will give each other suggestions, whether about work or life. It’s hard to find such a true friend in the industry.” He also said that Tiffany deserves someone “who will genuinely treat her well.”