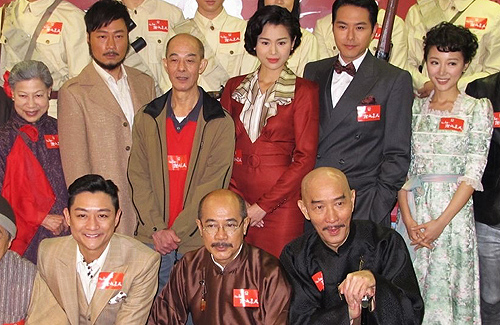 Producer Lee Tim Shing (李添勝) has been persuaded to postpone his retirement once again, with TVB hoping to produce another blockbuster in Rosy Business 3 <巾幗梟雄 之 諜血長天>. Although former leading lady, Sheren Tang (鄧萃雯), is absent from the third installment, Wayne Lai (黎耀祥) returns and packs a double punch by portraying a pair of twin brothers!

Wayne to Flex His Acting Chops

The costume fitting for Rosy Business 3 took place on February 20 at TVB City. Wayne appeared with a heavy beard and revealed that he will play two characters in the series–a pair of twins separated when they were young. One brother is a traitor during the Sino-Japanese War and will have a complex love relationship with Myolie Wu (胡杏兒), who portrays a spy that is later raped by a Japanese soldier.

Passionate kissing and bed scenes are planned between Wayne and Myolie’s characters. Wayne said, “The story speaks about life and death amidst war. Love is interwoven with hate; the relationship will be very passionate and full of high and low points.”

Portraying two characters will further challenge Wayne’s acting skills and possibly give him two nominations for Best Actor in this year’s TVB Anniversary Awards. Wayne looks forward to generate new sparks with Myolie, as he has already partnered with Sheren Tang in the first two installments and was afraid the audience would grow immune to their partnership.

Myolie admitted that she felt pressure in filming Rosy Business 3 since Sheren Tang had received wide critical acclaim in the series franchise. Myolie said, “There will be a new story line, but no doubt there will be comparisons with Sheren, who cannot be replaced. I will not think too much and do my best.”

Myolie added that the script is very well-written, although she is not accustomed to intimate scenes in dramas. Regarding her rape scene, Myolie said she will have to discuss with the director how the scene will be filmed, “This has become a frequent plot device in recent dramas. I don’t want this to become a selling point.”

Since breaking up with Bosco Wong (黃宗澤) last year, Myolie has focused on pushing her career to new heights. Although she was pursued by an admirer earlier, Myolie said that the relationship will not advance further. “After getting to know each other better, we felt it is better to remain friends.”