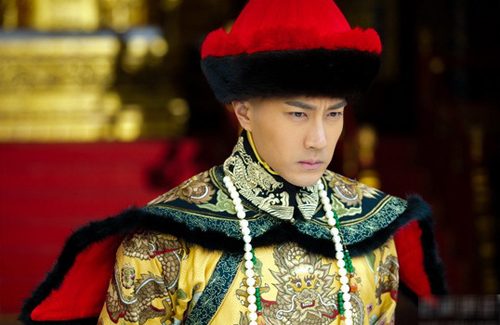 Above: Hawick Lau stars in Yu Zheng’s “Beauty Without Tears”.

Popular mainland Chinese television drama producer, Yu Zheng (于正), is under fire for plagiarism claims once again. The producer’s latest project, Beauty Without Tears <美人无泪>, is the third installment in his popular Beauty franchise <美人系列>, and it is currently airing on a prime-time slot on Hunan TV.

Acute viewers quickly noticed that Dayuer’s story line is almost identical to the plot of Legend of Zhen Huan <甄嬛傳>. In very similar scenarios, both female leads from both dramas start from being a very innocent and naïve woman to becoming a calculative, ruthless, and powerful royal figure.

“I’ve only watched the first and last few episodes of Legend of Zhen Huan,” Yu Zheng said. “In my opinion, Zhen Huan essentially becomes evil in the end. Dayuer does not become evil. She has always been pure and kind. She experiences from handling simple matters to complicated matters, but in the end, she will go back to where she first started. Our drama is about dreaming. Zhen Huan is about reality. Also, there is a lot of scheming in Zhen Huan, but our drama does not have much of that. It is about romance and a coming-of-age story.”

It is not the first time in which Yu Zheng was blasted for his lack of attention in copyright. Yu Zheng became one of the highest-paid producers in China after the release of Schemes of a Beauty <美人心计> in 2009, and the drama was accused for copying some iconic scenes from the award-winning TVB television drama, Rosy Business <巾幗梟雄>. In 2011, Yu Zheng released Palace <宫>, and the drama was slammed for being a rip-off of the popular novel, Bu Bu Jing Xin <步步惊心>. Yu Zheng denied all plagiarism claims.

Asked if his reason for stepping down was to avoid plagiarism responsibilities, Yu Zheng explained, “I can only write up to two dramas a year. I already wrote all that I could for palace dramas. My past two Beauty dramas were written in a man’s point of view. I really want this one to be in a woman’s point of view, to see the differences in perspectives.”

“Ms. Shen and I had fought over the script before,” Yu Zheng revealed. “I was amazed when I read that the two main leads, Huang Taiji and Dayuer, are not in love with each other. How is that possible? Ms. Shen told me that it was time for a change, and I ended up agreeing with her.”

Netizens remarked that the story line of Beauty Without Tears is boring and draggy, and some of them compared it to the likes of a typical romantic Korean drama. Yu Zheng agreed, “Ms. Shen’s screenplay is very much like a Korean drama. Nothing big ever happens, only the small stuff. Things that are wanted are never wanted. But I still want to know what happens in the end. It is so captivating.”

24 comments to Yu Zheng Denies Plagiarism in “Beauty Without Tears”