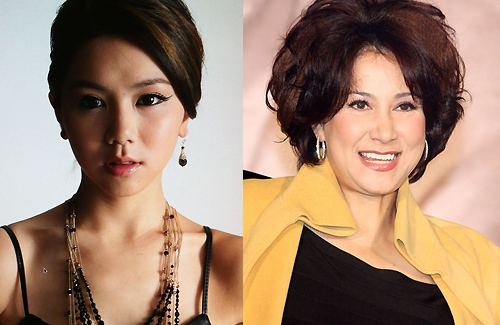 Pop princess, G.E.M. (鄧紫棋), has been slammed for “disrespecting” veteran Hong Kong diva, Jenny Tseng (甄妮), at a previous music festival event that was held in a soccer stadium.

Jenny Tseng is currently on her promotional tour to promote her Love Show World Tour Concert, which will be held at the Hong Kong Coliseum from February 18 to 20. Known for having one of Hong Kong’s most powerful and mellifluous voices, Jenny was asked in one of her interviews if she was aware of her young successor, G.E.M.

Jenny admitted did not have a very good first impression. The 59-year-old said, “You know that someone recognizes you, yet that person just continues to walk forward and refuses to acknowledge your presence. With this attitude, there is no point of being popular. You may be talented, but you lack self-cultivation. This is the face of a celebrity that fans are unable to see.”

After the report on Jenny’s interview was published, G.E.M. immediately posted an apology on her Weibo on January 3, explaining that she had once tried inviting Jenny to be a guest performer for her concert three years ago, but she never got a reply from Jenny’s agency. G.E.M. explained that Jenny was conversing with her friends when they met at the soccer stadium. The star-struck G.E.M. did not want to interrupt their conversation, and that all she could do was stare.

About half an hour later, G.E.M. edited her post and added, “I saw the report and realized that I have done something that made you feel disrespected, so I want to make a public apology.”

A spokesperson from Jenny’s record label said, “The concert organizers notified us of this report, and we read G.E.M.’s apology on her Weibo. First off, I was also there at the soccer field. At the time, Jenny was with three others in a hallway, while G.E.M. was walking with her assistant. It was a very short distance, and it was not like how G.E.M. wrote that she was surrounded by people. A little nod in the head would only take a second.”

Jenny’s spokesperson also clarified about G.E.M.’s unsuccessful attempt to invite Jenny to her concert, “It was not because Jenny did not want to be her guest performer. At the time, Jenny saved a slot from her work schedule in Taiwan so she could come back to support her juniors, but no one ever contacted us again about the concert anymore. We tried to chase for some details, but no one ever followed the case afterwards.”

Asked if Jenny had accepted G.E.M.’s apology, the representative said, “Jenny was just talking about an incident that happened. She rarely goes on Weibo; nothing would change if there was an apology or not.”

G.E.M. was not the only newcomer who was criticized by Jenny for their rude behavior. About thirteen years ago, Jenny also blasted Eason Chan (陳奕迅) for his disrespecting and condescending attitude.

At the time, Jenny along with a group of newcomers from the music industry such as Eason, Cecilia Cheung (張柏芝), and Daniel Chan (陳曉東), were sitting in the same flight to a music award ceremony. Jenny claimed that Eason, Cecilia, and Daniel were making too much noise. Eason ignored Jenny when she called him out to quiet down. Jenny exclaimed, “A senior is talking to [Eason], but he doesn’t look at you in the eye. He will not look at you no matter how many times you tell him. How is that not condescending?”

Eason explained afterwards, “Maybe it was because I just woke up at the time, so I felt really relaxed, and naturally I would talk in a loud voice. I really did look at her in the eye! Whether or not the person is a senior or someone else, if she has logic, I will listen. I will reflect myself!”

Jenny and Eason met again at RTHK’s studio months later. When it was time for Eason to leave the interview, an uncomfortable Eason bowed and said loudly, “Senior, I am leaving now!”