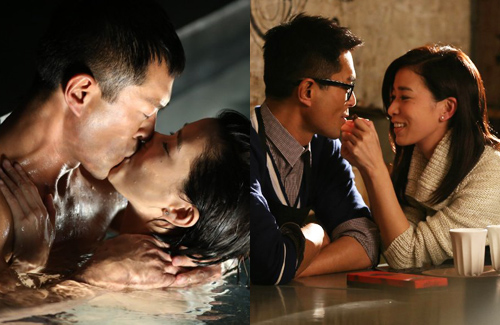 One of the main highlights of the Triumph in the Skies <衝上雲霄> movie is Louis Koo (古天樂) and Charmaine Sheh’s (佘詩曼) romantic storyline. In the film, Louis and Charmaine portray reunited lovers who fall in love again with each other years after their initial separation. With the majority of the unforgettable scenes filmed in England, Louis and Charmaine share the details behind their passionate kiss in the pool, walk in the rain, and shaving cream battle scenes.

Several years ago, Louis and Charmaine parted ways to pursue their careers. Now a flight attendant at Solar Airways, Charmaine is surprised to meet Louis again aboard a flight. Not only is Louis a pilot, he is also the new successor to the airline. Determined not to let his first love go, Louis pursues Charmaine once again.

While filming in England, the cast and crew were met with the challenge of trying to complete the outdoor scenes within a limited time period. However, the days were often filled with rain. Although the scene where Louis adjusts Charmaine’s high heels in the rain were added as a last minute inspiration, the effect was surprisingly romantic.

It turns out that filming their kissing scene was the least fun.  Louis recounted, “I was shivering and my teeth were clattering when I took off my clothes in the pool. Although we had to pretend to be deeply passionate, I felt the atmosphere was more humorous as there were a dozen crew members surrounding us with cameras and lights.”

The morning after their passionate night together, Charmaine helps shave Louis’ facial hair. They ended up spraying each other with shaving cream. Admitting she was mesmerized by Louis, Charmaine said, “This scene really captures the feelings of lovers!” Since Louis accidentally bumped her head her during the shooting of the scene, Charmaine joked that he has to take care of her for the rest of her life. “Louis looks very cool, and I felt anxious working with him. But I realize he is very warm and knows how to take care of others after getting to know him.”

With the London Eye serving as a backdrop during key moments of their relationship, such as their first date, breakup, and marriage proposal scenes, Louis came to think of Charmaine each time he saw the ferris wheel.

The trailer of Triumph in the Skies provides teaser clips of Louis and Charmaine’s romance, but it is best appreciated in theaters when the movie opens on Lunar New Year, February 19.

“Triumph in the Skies” Trailer