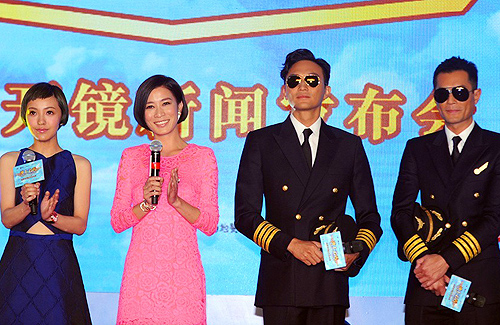 Since its production was announced, the movie version of Triumph in the Skies <衝上雲霄> has raised intense interest. Aside from Francis Ng (吳鎮宇) and Chilam Cheung (張智霖) resuming their popular pilot roles, Louis Koo (古天樂), Sammi Cheng (鄭秀文), and Charmaine Sheh (佘詩曼) are new additions to the stellar cast. Filming in Europe wrapped up recently, and the cast shared their adventures at a press conference in Beijing today.

The cast tested each other on their skills in dealing with difficult passengers on board a flight. If he encountered a passenger with a fear of flying, Louis said, “If it’s a man, I would ask a cabin crew member with a good figure to sit and chat with him, to distract his attention. If the passenger is a woman, then Chilam can sit next to her!” Portraying Chilam’s love interest in the movie, Amber Kuo (郭采潔) added that she frequently fell under Chilam’s charms during filming too.

Louis’ banter revealed his good chemistry with Chilam although it has been seven years since their last collaboration. While filming in England, Chilam had a chance to catch up on more in-depth conversations with Louis. Chilam said, “My hotel room didn’t have a thermostat control and it was very cold, so I often went to Louis’ room to warm up. The scenery was very beautiful and everyone got along very well. We truly enjoyed [the filming experience]!”