Dominic Ho Gets Creamed for Cheating on Kandy Wong? 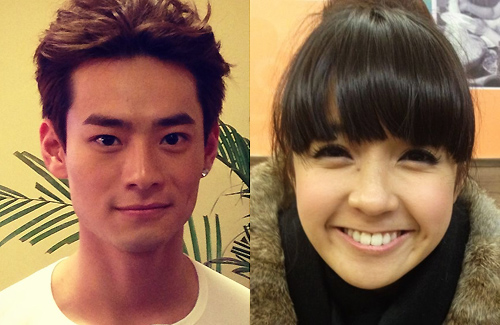 Caught cheating? Kandy Wong’s (糖妹) boyfriend, Dominic Ho (何浩文), was creamed in the face after he was seen intensely making out with Alex Lam’s (林德信) rumored girlfriend, Linah (松岡李那), in the streets of Central, Hong Kong, on Tuesday night.

To everyone’s amusement, the entire setup turned out to be only a scene for Patrick Kong’s (葉念琛) upcoming romantic comedy, The Best Plan is No Plan <媾女不離三兄弟>.

Tuesday’s night scene featured Dominic and Linah kissing intensely in the middle of the street. Shiga, who portrays an animal activist in the film, dislikes Linah’s endorsements on fur coats, and for revenge, she throws a cream pie at Dominic and Linah during their kiss. Shiga runs away as Dominic and Linah throw curses at her.

Due to the inconvenient weather, Dominic and Linah had to redo their scene at least four times. After each cream pie attack, Dominic and Linah would have to wash up, reapply their make-up, and redo the scene over again. The entire duration of the filming process took the entire night.

Despite the long hours, Dominic looked exhausted but was relatively happy. Linah seemed to be enjoying herself and immediately smiled at the approaching press.

Currently dating Kandy Wong of Sugar Club, Dominic expressed that he had notified his girlfriend of his kissing scene with Linah beforehand. Who is the better kisser? Dominic immediately said, “Of course [my] girlfriend!”

Although she had no scenes to film that night, Jacqueline Chong appeared on set to look over the production process. Rumored to be Patrick Kong’s girlfriend, Jacqueline also wore a matching red outfit with the director.

As revealed by Patrick at an earlier press conference, Sammy will have kissing scenes with his two love interests in the film, portrayed by Shiga and Jacqueline. Asked why Patrick was willing to let other guys kiss his girlfriend, Jacqueline smiled and said, “What? Why am I in the picture now? [Dominic and Linah] are the ones who are kissing right now!”

8 comments to Dominic Ho Gets Creamed for Cheating on Kandy Wong?