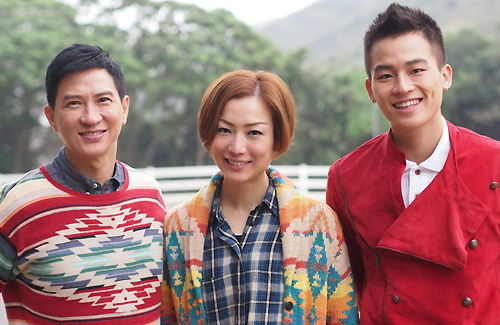 Temporary Family tells a story about four unlikely people who are forced to live together in one house. Nick Cheung portrays real estate agent Hong Siu Lung, who was dumped by his greedy fiancé when the house he gave her was too small. One day, he comes across an ad about a cheap penthouse on sale. Wanting to purchase the house and then resell it for a higher price, he strikes a deal with three others – Kam Fung (Sammi Cheng), a wealthy divorcee; Ah Hak (Angelababy), Hong Siu Lung’s stepdaughter; and Very (Oho), a wealthy college graduate from mainland China, convincing them to split the purchase with him. When the estate market fell, the four are forced to live together.

The cast of Temporary Family shared some of their own real-life co-habiting experiences at the press conference. Angelababy’s story, in particular, was the most shocking – she revealed that she and her best friend, whom she used to live with, would strip off their clothes and compare their bodies in front of a mirror.  Oho revealed that when he was still dorming, he would often sing in the shower early in the morning.

The film is directed by Cheuk Wan Chi (卓韻芝), also known as Vincci, who is known for her DJ activities with Ultimate 903, her lifestyle books, and directorial work in the film Kick Ass Girls<爆3俏嬌娃>.