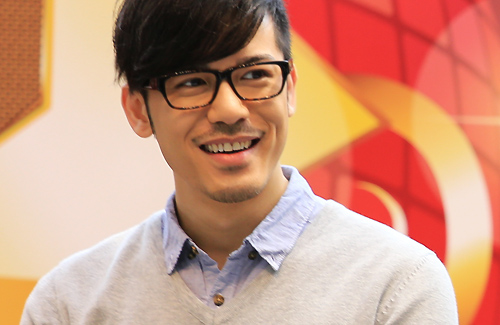 Before the broadcast of Young and Dangerous: Reloaded <古惑仔: 江湖新秩序>, most people have only heard of Sammy Shum (沈震軒) due to his relationship with JJ Jia (賈曉晨). The 29-year old TVB artist was brought to the audience’s attention with his fresh villain role in the film, and this year can be seen as the continuation of a promising future in the movie industry.

Sammy has signed a contract with Paco Wong’s (黃柏高) Sun Entertainment Culture, becoming a highly promoted artist along with Fiona Sit (薛凱琪) and Hanjin Tan (陳奂仁). Sammy is signed for three films, and he will also be singing the theme songs. Paco was impressed by Sammy after seeing his photos and found out he can also sing. Paco said, “He is definitely the one to promote!” As to whether Sammy will have a chance to release his own music album, that will have to depend upon the market response.

In addition, Sammy was also nominated for Best New Performer in the 2013 Hong Kong Film Awards. Although the winner remains unknown, Sammy expressed, “Being nominated is already like receiving the award for me. I don’t have an affinity for awards, so I’ll take it naturally!”

Sammy immigrated to Canada when he was in high school. In 2005, he returned to Hong Kong and participated in the New Talent Singing Awards, in which he made it into the top 5 at the semi-finals. In 2009, Sammy enrolled himself in the TVB Artist Training Program. Since then, he acted as a host for a variety show and had cameo roles in dramas.

In May this year, Sammy will start filming for director Patrick Kong’s (葉念琛) new romantic movie. Sammy and TVB actress, Angel Chiang (蔣家旻), will act as leads in Movie’s First Was Not Yours <電影第一次不是你>. First time as lead, Sammy revealed his excitement. “I like to watch television and movies. As a newcomer, I’m really happy to be able to film a movie this fast. I feel really lucky to be able to have such achievement after 5 years in the industry. Maybe it’s because I came from the training class and started off onscreen as a dead body or soldier, so I really treasure every chance I get.”

As a hardworking individual, Sammy aims for his best so that he gets every opportunity possible. “I don’t like getting 100 percent, but rather 120 percent. I need to be well-prepared myself in order to have a next time. It’s just like when I was being a guest for a kids’ show. It was unexpected that a gold manager became interested in me.”