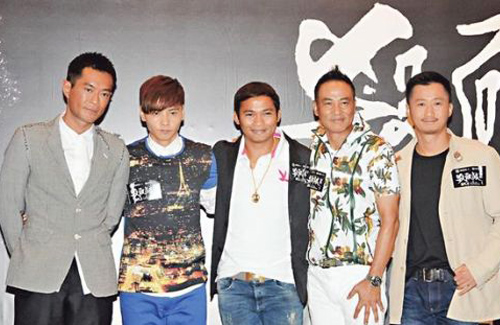 SPL 2 <殺破狼II>, the prequel to 2005’s SPL: Sha Po Lang <殺破狼> starring Donnie Yen (甄子丹), held a press conference in Hong Kong on June 13. The martial arts film, directed by Cheang Pou Soi (鄭保瑞) and produced by Wilson Yip (葉偉信) and Paco Wong (黃柏高), commenced principal photography on May 1. Though Donnie will not star in SPL 2 – reportedly because of his commitments to his two other projects Dragon City <九龍星西> and Crouching Tiger, Hidden Dragon 2 <臥虎藏龍2>, there is a possibility that he will make a brief cameo appearance in the film.

“There are seriously no girls at all on set. I’m relieved. That is, if you don’t include the maids or the stylists,” said Louis.

Seeing that his character is not responsible for most of the martial arts actions scenes in the film, Louis originally thought he would not get too injured. “Tony Jaa and the rest fight all day. They have a particular way of fighting that I’m unable to take part of. However, there was a time when I accidentally hit myself with a prop. My head is still swollen from it. Then I got hit by a car. It was an action scene we didn’t really rehearse because we wanted to see how we would do it in the first try. The result was great.”

It is reported that Oxide Pang (彭順), who had an affair with Liddy Li (李悅彤), has plans to make a sequel for Out of the Inferno <逃出生天>. Asked if Louis would return for part two, he said, “I didn’t even know about the sequel until I read the news. I know now that they are preparing for it, but it would take a while.”

Gossip claims that Oxide is making a Out of Inferno 2 to salvage his relationship with wife Angelica Lee(李心潔), who also starred in the original film. Louis said, “I really don’t know about that, and I am also in no position to make a comment about it either. I do hope that the original cast and crew will return.”