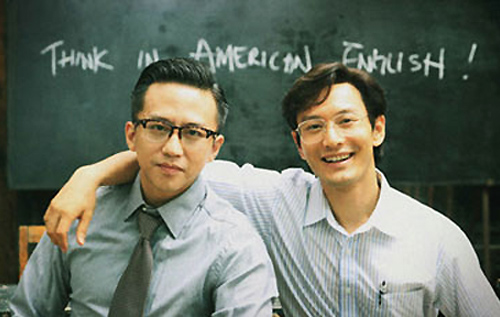 In just a matter of weeks, the box office of Peter Chan’s (陳可辛) American Dreams in China <中國合伙人> soared passed 400 million RMB, dethroning Hollywood champions Iron Man 3 and The Croods as the number one movie of the month in mainland China.

During a group photo for the press, Shawn Yue generously yielded his middle spot to Peter Lam, but the action led the 55-year-old tycoon to stand next to Anita Yuen, who was alleged to be his girlfriend during Anita’s early years in the entertainment industry.

The former rumored couple did not feel awkward when posing by each other, assuring that the rumors were too old to even remember. Anita even politely nodded her head at Peter when he approached her for the group photo. Anita’s current husband and Triumph in the Skies 2 <衝上雲宵II > star, Chilam Cheung (張智霖) arrived at the party just after the photo call ended.

Freshly single, Leon Lai has been avoiding the public since he separated with former wife Gaile Lok (樂基兒). Leon continues to maintain his silence in regards to Gaile’s rumored engagement to waterskiing trainer Cuz and was one of the last guests to arrive at Peter Chan’s screening.

Leon said, “Peter is my good friend, so I have to come to support him. I am still waiting for the opportunity to work with Peter again.”

Aaron Kwok, a long-time friend of Peter Chan, revealed that he had to turn down two of Peter’s films due to scheduling conflicts in the past. “Peter personally reached out to me two times about working together. I was very happy, but scheduling didn’t work out in the end. I am available next year, so I will be waiting for another collaboration.”

The 47-year-old’s thoroughbred recently won in a lucky horse race, which accentuated his rumors with TVB actress Christine Kuo (苟芸慧). Tabloids indicated that Christine had brought in luck for Aaron and his group of horseracing enthusiasts. Aaron said, “They are nonsense reports, and very fake. I can do nothing but laugh!” How about reports alleging that Christine had moved into his Tai Hang mansion? “[One word], stupid!” exclaimed Aaron as he proceeded to the theater.