Aaron Yan Glad to Be Free of Fahrenheit 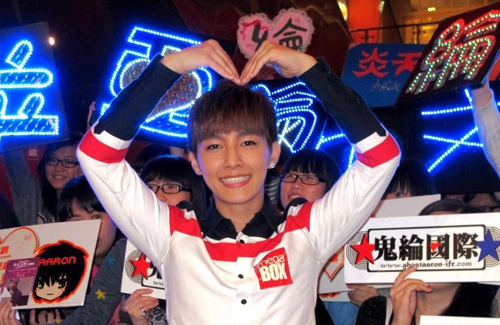 The now defunct Taiwanese pop group, Fahrenheit (飛輪海), once dominated the charts and the hearts of many devoted fans. It was rumored that the 4 male artists did not get along, causing a rift amongst the group and eventually going their separate ways. Aaron Yan (炎亞綸), who was in Hong Kong to promote his upcoming solo album, said, “I feel much more free after going solo.”

Aaron shared that his new album, The Moment, focuses on his own relationships. He said, “I don’t think the company likes artists to divulge too much information about their personal lives, but I want to use this opportunity to let my fans understand me as an artist through my music.” Aaron was not shy when he spoke about his past relationships. “I was in a committed relationship when I first joined the industry. We lived together but because I was so busy with my work, she picked up all her belongings one day and left.”

Aaron reveals that he made a lot of sacrifices and accommodations to be part of the boy band. He said, “I’m more of a romantic ballads kind of singer, but we can’t be performing those kind of music with the boy band because fans want to be entertained by our dancing and upbeat music. Because I was the youngest amongst the other guys, I had to act as the innocent and naïve one when in fact, I had the most experience. That’s why now that I’m a solo artist, I can truly express myself and hope to launch my music career the way that I want.”

He also took the opportunity address the speculation that the 4 members did not get along. “We worked together for 6 years and all know that deep down inside, the bond we shared was not fake. It was only because we wanted to pursue our own interests separately. Just like how Jiro Wang (汪東城) loved performing as a part of a band, but I like to sing romantic ballads.”

Regarding reports that Jiro hinted at Aaron’s plastic surgery which resulted in a slight resemblance to Jiro himself, Aaron was quick to brush the topic off. “I’ve seen the reports. I think what Jiro said was taken out of context and misinterpreted. As to whether or not Jiro had surgery done, you should ask him instead.”

48 comments to Aaron Yan Glad to Be Free of Fahrenheit