Aaron Yan is a Psychopath in New MV, “That’s Not Me” 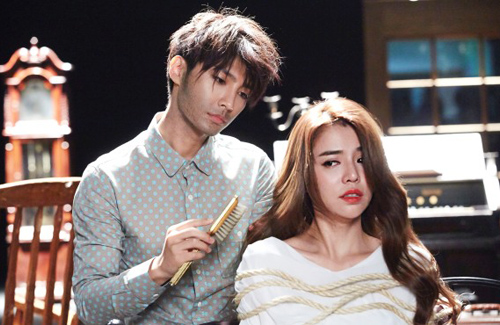 Aaron Yan (炎亞綸) turned into a psychopath for the filming of his new music video, “That’s Not Me” <這不是我>. The music video, which also stars Aaron’s good friend Tia Lee (李毓芬) of the girl group Dream Girls, is violent and disturbing.

Aaron, looking unkempt and mentally unstable, drags his lover, portrayed by Tia, by the hair and ties her to a chair. He also attempts to lock her inside a suitcase. Aaron said that it was a difficult scene to do because of the suitcase’s small size, but with Tia’s flexibility, she managed to cramp herself into the suitcase within ten seconds.

Both Aaron and Tia expressed that they felt like they were shooting a horror film. “I never played this type of character before,” said Tia. “People have also not seen me in such a torturous position. It is alarming. Also, I really like watching horror films.” Aaron explained that he enjoys reading horror and suspenseful novels, and did not find the filming process difficult.

“That’s Not Me” is the ending theme for the Sanli idol drama Fall in Love with Me <愛上兩個我>, which also stars Aaron Yan and Tia Lee. The song is the first promotional single for Aaron’s upcoming studio album Drama, which is slated for a May 30, 2014 release.

14 comments to Aaron Yan is a Psychopath in New MV, “That’s Not Me”