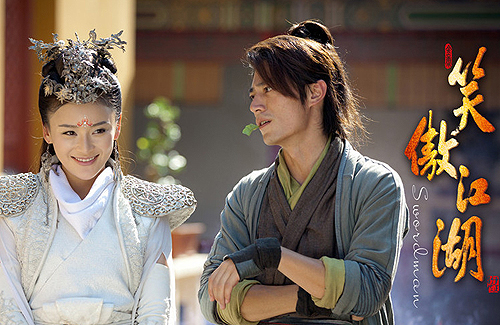 Swordman is Yu Zheng’s (于正) first foray into the wuxia genre, a departure from his trademark “scheming palace ladies” genre. Yu Zheng maintains that Swordman is the most loyal adaptation of Jing Yong’s wuxia novel to-date, while delving into the romantic details more deeply.

Linghu Chong (Wallace Huo) will be  engaged in amorous relationships with Yue Lingshan (Yang Rong 杨蓉), Ren Yingying (Yuan Shanshan 袁姗姗) and even Dongfang Bubai (Joe Chen 陈乔恩). Expelled from the Mount Ha Sect, Linghu Chong is soon caught in the power struggles between the different sects of wulin. In his journeys, Linghu Chong learns to mend his broken heart and find love once again.

With the broadcast date only one month away, Wallace Huo’s opening theme song for Swordman, “Free and Unfettered” <逍遥> was released online today. Demonstrating his earlier singing background, Wallace’s voice is crisp in delivering the lyrics that were penned by Yu Zheng.