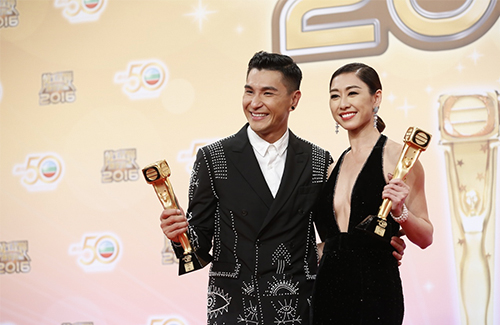 Hong Kong’s 2016 television season has come to an end with the TVB Anniversary Awards, which were held on Sunday, December 18. This year, regular MC Carol “DoDo” Cheng (鄭裕玲) co-hosted the show with Sammy Leung (森美) and the duo FAMA (農夫), bringing new faces to the industry’s most prestigious ceremony.

A total of 17 awards were handed out on Sunday night, including the professionally-judged TVB Lifetime Achievement Award and the Professional Actors Award. Winners were determined by both popular vote and a professional judging panel, with some awards determined by votes submitted by TVB’s own artiste department. “After so many years in the industry, I thought about giving up,” said the new TV King during his acceptance speech. “But I was fortunate enough to have so many people around me to give me opportunities to continue trying. This is my 21st year in the industry. There are so many people I want to thank! I will never forget you guys!” Ruco especially thanked his mother, who was in attendance, for her unwavering support since he first decided to become an actor in 1994.

Nancy Wu, now a two-time TV Queen, said, “A year has gone by so fast. When they called my name last year, I was in shock. I felt like I was dreaming. I didn’t expect that I’d be able to step into this stage again this year.” Benjamin thanked his ex-girlfriend, Jennifer Shum (岑杏賢), for her support in the last three years. “For years, I didn’t do anything else but work. I’ve neglected so many people. This award is for you too! Thank you, Jennifer!” Benjamin then thanked his parents, with tears in his eyes.

Grace was in shock when her name was announced for Most Popular Female Character. The 30-year-old actress, who is recently engaged, thanked her friends and the crew of A Fist Within Four Walls for bringing her character into life. Check out the full list of winners below, including the top nominations:

Most Popular Drama Theme Song
“Never Know You Are the Best” (“A Fist Within Four Walls”) by Ruco Chan and Nancy Wu — WINNER
“Remember to Forget Me” (“Wu Xin: The Monster Killer”) by Alfred Hui
“Love Takes Courage” (“Dead Wrong”) by Stephanie Ho

Most Popular On-Screen Partnership
Vincent Wong and Tracy Chu, “Over Run Over”