Hong Kong lost a brilliant actor when Liu Kai Chi (廖啟智) passed away from stomach cancer in March 2021 at the age of 66. His family had only three weeks to grapple with the discovery of his cancer before losing him.

His wife, Barbara Chan (陳敏兒), was understandably in shock and finally spoke about her grief and mourning over Liu Kai Chi’s  passing.

In an interview with ViuTV program, Through the Darkest Valley (21克公寓), Barbara and her younger son, Liu Man San (廖文信) revealed that Liu Kai Chi had led a healthy lifestyle without any unhealthy habits such as smoking and drinking. Liu Kai Chi also exercised regularly and often went on hikes. During a check-up for incessant gastrointestinal discomfort, he was shockingly diagnosed with late-stage stomach cancer that had already spread to his liver. He passed away merely one month after being diagnosed. 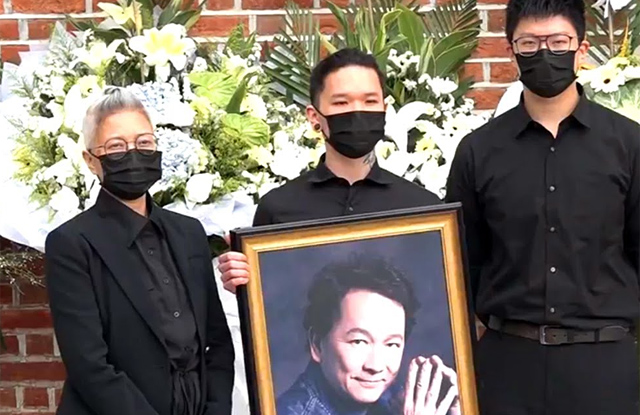 “Who would have imagined… three weeks ago, a healthy person who could run up to the peak of a mountain is told he only has one month left to live?” Barbara sighed.

Although Liu Kai Chi was initially shocked and depressed upon learning of his diagnosis, he faced the situation bravely during his cancer treatment. He had smiled and told Barbara that he wanted to live to see his two sons get married. The biggest change in Liu Kai Chi’s final days was “he became very talkative every day. He asked the family to substantiate [his importance],” Barbara said.

Since Liu Kai Chi did not want to let his friends know about his terminal illness, Barbara asked all of his friends to send video clips where they discussed their favorite memories with him. Some were directors who had worked with Liu Kai Chi and greatly admired his acting. Barbara did not reveal that Liu Kai Chi had cancer, and only told them the clips were meant to be a surprise for his birthday. “Even though they did not say goodbye to him face-to-face, they were able to do it virtually so there were no regrets for anyone.”

The couple’s son, Liu Man San, shared that his father’s last wish was for he and his elder brother to take good care of their mother. After their father’s passing, the duo learned to bear more responsibility and become the family’s protectors and closely watch over Barbara, who had suffered deep depression in 2006 after losing her youngest son to leukemia. Although tragedy has dealt another recent blow to the family and reminding them of the fragility of life, Barbara made sure to fulfill Liu Kai Chi’s last wishes so he would not pass away with regrets.

Barbara Talks About Losing Both Her Son and Husband