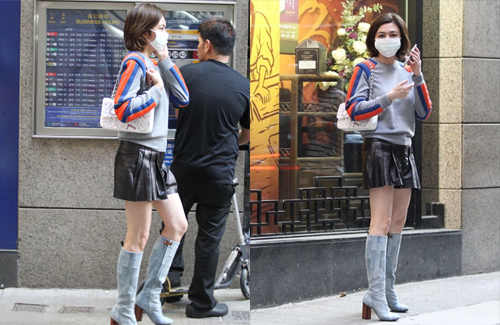 Since retiring from showbiz in the early 2000s, former Hong Kong actress Rosamund Kwan (關之琳) rarely made public appearances. The 52-year-old has instead focused on managing her own businesses and spending time with longtime boyfriend, 58-year-old Taiwanese businessman Chen Tai Ming (陳泰銘). Last year, reports surfaced claiming that Rosamund had been suffering from a small brain tumor for over 20 years, but this was later denied by the actress herself.

Tossing away negative reports about her health, Rosamund showed that she is still as fit and healthy as ever despite being over 50. Recently, Rosamund was spotted visiting a health clinic in Central. Wearing a face mask, Rosamund looked slightly pale and ill. Nonetheless, she exuded her confidence by wearing a short skirt, showing off her toned legs. Though turning 53 this year, Rosamund looks like she has not aged since 1993.

Rosamund left the clinic around 5 p.m.. While looking for her driver down the street, Rosamund noticed the press taking photos of her, but did not confront them. She then quickly turned a corner and left with her driver.

The daughter of late Shaw Brothers actor Kwan Shan (關山), Rosamund debuted in the industry through the ATV drama Agency 24 <甜甜廿四味>. She made her first film appearance in the 1982 film The Head Hunter <獵頭> and is perhaps best known for popular portrayal the 13th Aunt in Tsui Hark’s (徐克) Once Upon a Time in China <黃飛鴻> films.

After two decades of box office hits, Rosamund announced her retirement from movies in 2007, expressing that she wants to work on her own real estate company instead. The sudden announcement led to rumors that Rosamund retired because of her health.