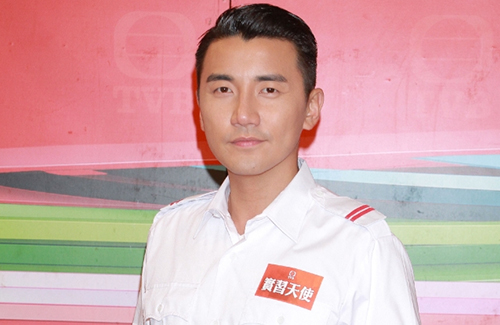 It is an open secret that Tony Hung (洪永城) and Natalie Tong (唐詩詠) are quite fond of each other, but the two TVB artistes never bothered to confirm their relationship. While Tony was away in North Korea to shoot a travel program, Natalie was spotted eating a late dinner with Sammy Sum (沈震軒), leading to rumors that Natalie may be seeing Sammy instead of Tony.

On the set of TVB’s upcoming drama Intern Nurses <實習天使>, Tony, who just returned from North Korea, said he “100 percent” believes in Natalie. He said Natalie and Sammy are good friends. He will not get jealous of Sammy, revealing, “I know they went out to eat.”

He laughed at the ridiculous rumor. “I’ve only been gone for 10 days and now there’s a new rumor. I should do not travel programs anymore.”

The reporters suggested that Tony and Natalie should go public in order to prevent more similar rumors from occurring. Tony laughed, “Waiting for the opportunity!”

At the mention of his visit to North Korea, the world’s most secret state, Tony said his trip went by smoothly and safely. He added that North Korean girls were very pretty and natural. Asking if they were more beautiful than Natalie, Tony flirtatiously said, “I have not seen a North Korean girl prettier than Natalie Tong!”