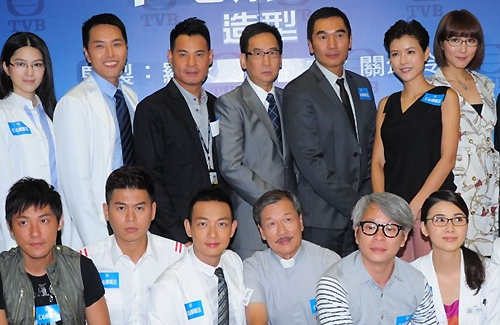 The cast and crew of A Great Way to Care 2 <仁心解碼II> attended a costume fitting press conference in Tseung Kwan O’s TV City on July 26th. A Great Way to Care 2 is the direct sequel to the series bearing the same title, which starred Alex Fong (方中信), Kate Tsui (徐子珊), Raymond Wong (黃浩然), Ram Chiang (蔣志光), and Ben Wong (黃智賢). At 20 episodes, A Great Way to Care aired between January and February 2011, and became the eighth highest rating drama series of 2011.

A Great Way to Care 2 sees the return of main cast members Alex Fong, Ram Chiang, Ben Wong, and Cheung Kwok Keung (張國強). Original cast member Raymond Wong, whose character left for Singapore with his girlfriend (portrayed by Vivien Yeo) in A Great Way to Care, will not return in the sequel.

Although Tavia Yeung has officially joined cast, she was absent at the costume fitting. Alex Fong joked that Tavia is still “charging her batteries” in Korea, but expressed that he did not know if she is really dating her rumored boyfriend, Him Law (羅仲謙).

When asked why he decided to film for TVB again, Alex said, “I will have more time to spend with my daughter now that I’m in Hong Kong. My film contract with TVB has not ended yet.”

Yoyo Mung has No Plans for Marriage

Asked for her thoughts on Bosco Wong (黃宗澤) and Myolie Wu’s (胡杏兒) recent breakup, Yoyo Mung briefly replied, “It is part of life. Only they will know the truth. Being happy is the most important thing.” After dating Ekin Cheng (鄭伊健) for 7 years, did Yoyo have the urge to marry him? She said, “No. I don’t believe that marriage is the only way to hold a relationship together.”

24 comments to “A Great Way to Care 2” Costume Fitting