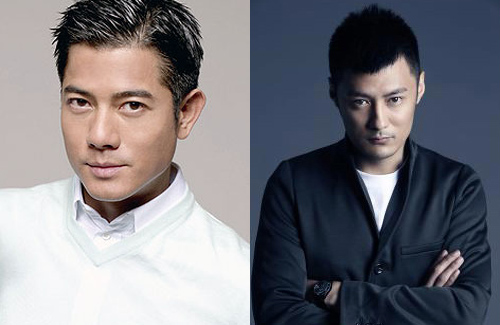 Ending the year off on a bad note, Aaron Kwok (郭富城) was recently labelled as a womanizer. Aside from his infidelity in love, Aaron also reportedly badmouthed friend, Shawn Yue (余文樂). Although they circulate in the same social circles, Aaron spoke poorly of Shawn and called him a city slicker and copycat in a private text message exchange.

A mysterious woman known as Miss R., a 23-year-old student exchange student in Japan, claimed that Aaron cheated in their three-month relationship. After bashing Aaron’s infidelity, Miss R. also revealed Aaron only keeps up a facade in his friendship with Shawn Yue. Often seen partying with Shawn, Aaron surprisingly called the younger artiste a “city slicker” who always copies his style.

Miss R. revealed the private text message exchange she had with Aaron:

Aaron: Why? Is he your ex[boyfriend]?

Miss R: No, when I watch him on TV, I feel like he always follows others.

Aaron: Not only him. Why do people always try to copy me?

Aaron Doesn’t Think Shawn is Up to Par?

An insider spilled, “When he first debuted, Shawn used his connections whenever he went out. He’s been earning more money these years so he has the ability to buy nice cars and houses. He also got close to [fashion mogul] Shum Ka Wai (沈嘉偉) – they’re getting more and more friendly. Shum Ka Wai, Aaron, and Chilam Cheung (張智霖) were the three musketeers but Chilam has been busy lately, so Shawn replaced him and began spending more time with Aaron and Shum Ka Wai. Shawn knows his way around the two brothers, but maybe Aaron thinks Shawn isn’t up to par!”

Despite Aaron trash-talking Shawn in his text message, it turns out both singers have a lot in common. Both Aaron and Shawn enjoy pursuing and meeting young pseudo-models online. Shawn was previously romantically linked to model LuLu Wang (王璐瑤) and allegedly sent her suggestive text messages and pictures.

Miss R. revealed that Aaron cheated on her with a young model named “M”. Besides “M”, who is speculated to be pseudo-model Milla Ching (程芷渝), Aaron allegedly flirted with a lot other models.

Aaron was also recently linked to race-car loving model, Cory Pang (彭湘淇). Known for following 18 models on his Instragram account, Aaron has been giving Cory a lot more attention than the others. When Cory was mentioned during an interview, Miss R. angrily spat, “I don’t know Cory, but some young models tell others that they’ve kissed Aaron and think that it’s something to be proud of. In Aaron’s world, it doesn’t matter if you’ve kiss him or not – you’re still not with him and not his girlfriend!”

Feeling helpless, Aaron released a 1000-word essay claiming that Miss R. had defamed him and said the cheating accusations were all false.

15 comments to Aaron Kwok and Shawn Yue are Frenemies?