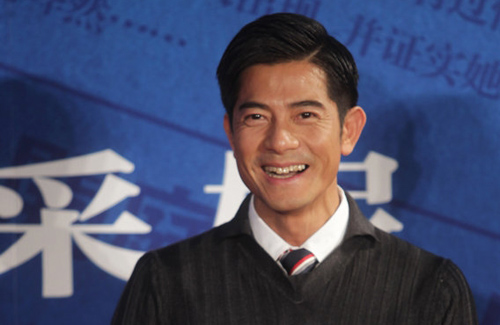 Since breaking up in April, Lynn Hung (熊黛林) and Aaron Kwok (郭富城) have moved on from their seven-year relationship.  Lynn is dating another man and remarked that she has deleted Aaron’s contact number from her mobile phone.

At a mall event yesterday, Aaron was asked to comment on Lynn’s statement. Aaron said, “I do not want to answer or give any response anymore, it’s already over and just let it be.” He added, “I give her my blessings and I do not want to give further comment on this.” Aaron also hinted that he has more freedom now as he enjoys his current status of being single with more time for other things.

Aaron is well known for his ambitions and high expectations of work. He is considering directing and already has some ideas on a new script. Earlier in a report, Aaron said he has the intention to invite the other three “Heavenly Kings” to guest star in his new movie. It was understood that Jacky Cheung (張學友) has expressed interest. Aaron was full of praises for Jacky “There is a role which is very ideal for Jacky, actually we have worked together in a movie many years ago and he is a very good actor.” As for the female lead, Aaron may choose a new actress for the role. When asked if Lynn has a chance to be cast? Aaron said, “The most important thing is suitability.”

Although Aaron did not watch his good friend, Chilam Cheung’s (張智霖) current drama Triumph in the skies 2 (衝上雲霄II), he was happy when he learned that Chilam’s portrayal of a playboy pilot has received positive comments. Aaron jestingly said that “In my movies, I have never had such roles before; perhaps I should give it a try.”