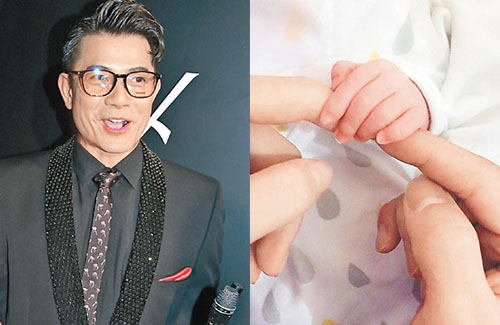 Film King Aaron Kwok (郭晉安) has been through his fair share of adrenaline-inducing action scenes like car races and gun battles, but none of that ever came close to the day he had to cut his daughter’s umbilical cord.

Aaron said his mother was probably the happiest one out of all of them. “It was touching. I’ve been so focused with my work, and although I would always spend time with my mother, seeing my mother hold her grandchild for the first time is indescribable. It really is something else.”

51-year-old Aaron married 29-year-old Moka Fang (方媛) in April of this year. Though rumors said Aaron’s daughter was born on September 1, Aaron didn’t confirm the birth until September 22, when he shared a picture of his daughter holding her parents’ fingers. Aaron said his little princess was born naturally, and weighed six pounds.

“Becoming a father is such a magical feeling,” said Aaron. “I want to do well as a father, do well for my family. I hope I can balance both family and work in the future. (Does your daughter have a name yet?) I want the elders from my mother’s side to pick a name. We’re just calling her BB for now. (Will you hold a hundred-days banquet?) Not necessarily. Maybe we’ll just have a family dinner.”

Aaron shared that his daughter’s birth was the happiest moment of his life. The actor-singer has been taking videos and pictures of his daughter every day to document her growth, but he will not share the details of them online.

“I’ve been staying home all day now,” said Aaron. “My friends won’t be able to find me. I would usually spend a night with some friends, but now that my daughter’s here, I go straight home after work.”

Many of Aaron’s friends have been calling to meet him and the baby, but Aaron said they’re going to have to wait. “She’s still too small and young, but I’m planning to meet everyone once Lunar New Year comes around. She will also be bigger then.”

1 comment to Aaron Kwok Finally Talks About His Daughter: “The World’s Different Now”