In Hong Kong film I’m Livin’ It <麥路人>, Aaron Kwok (郭富城) ditched his glamorous image to play a dispirited man struggling to make ends meet. Aaron confessed that he was attracted to the film’s themes and used his personal experience to deliver a praiseworthy performance.

Besides Aaron, the film features an impressive cast including Mariam Yeung (楊千嬅), Alex Man (萬梓良), Nina Paw (鮑起靜) and Cheung Tat Ming (張達明) acting as a group of ordinary people living below the poverty line who bonded after spending the night at a 24-hour restaurant. For his role, Aaron relied on his experience growing up in a low-income family to convincingly bring his character to life.

Recalling his childhood, Aaron revealed, “I grew up in a big family. I was the youngest among my two brothers and two sisters. There was a lot of pressure on my parents to raise us, so I worked during the summer breaks. I didn’t want to always ask my parents for pocket money.”

Since Aaron lacked work experience during his youth, the star confessed his summer jobs were physically demanding and he even became a cleaner for a friend’s company. His experience as a cleaner can be seen in the movie, “In the opening scene where I was using a waxing machine, I actually learned to use it when I was a cleaner during my youth. It was used to polish marble and can also be used on wood. If you don’t know how to use it, it would be hard to get into the scene’s rhythm.”

Describing his thoughts on drawing his personal experience for the film, Aaron shared, “It was a reflection of the experience of life. In experiencing this type of hard labor work, you will feel the [characters’] struggles. By using my own experience to interpret my character, it was easier to nail it.”

Other than using his past experiences, Aaron also got into his character by starving himself, “Acting is a kind of lifestyle–I have never acted as a vagabond before but I can feel it. When filming, I deliberately went hungry and grasped onto that feeling to shoot.  To be hungry but to insist on not eating, I was able to feel that sense of powerlessness. I got to the point where I was too hungry to speak and I felt my character’s existence.”

Getting Over Emotional Scenes 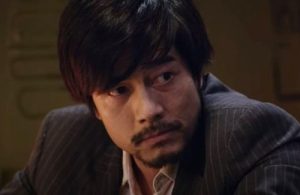 Fans were concerned if Aaron, who is known to be a filial son, was able to handle the emotional stress of his character especially since his mother passed away early this year. Aaron responded, “I am not worried. People are emotional animals, so releasing your emotions is normal. When you find something that is emotional and affective, you need to release yourself and cry. It is better than to endure it. People need this feeling.”

While sympathizing with his character who chose to escape and carry his guilt for his family, Aaron offered his own insight, “It is impossible for anyone to not make any mistakes. No matter if the mistake is big or small, it is important to sincerely face them. You can’t close yourself off. You need to seek forgiveness.”