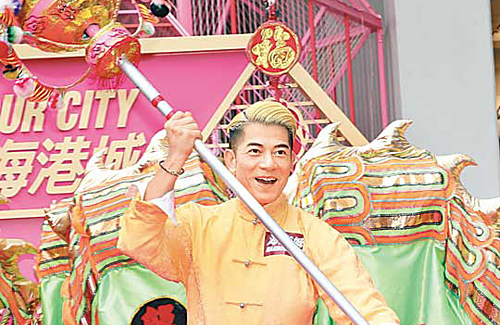 With wife Moka pregnant with baby no. 2, Aaron hopes to have more kids but will respect her decision.

Appearing in Tsim Sha Tsui for a Lunar New Year event, Aaron Kwok (郭富城) reveals that his year ahead has already been lined up with many activities. In addition to starring in four movies as well as commercial shoots, he hopes to break his 100-show record with his upcoming “De Aa Kode World Tour 2019 Concert” <舞林密碼>.

Known for his collection of luxury sports cars, the birth of his daughter Chantelle has seemingly turned Aaron into a doting father and careful driver. Aaron commented that he now drives thoughtfully. “Now I drive very slowly, mostly my five-seater family car. I follow the speed limit on the road and peer into the rear view mirror to see if my daughter is sitting comfortably,”

Although he has yet to reveal his second child’s gender, the 53 year old had previously mentioned that he would strive to give his mother a grandson, and seems to favor having more kids. “My wife is a single child, (growing up alone) she hopes to have more kids too. I also like kids and have four brothers and sisters myself.”

Adding that he will “have four kids at most”, Aaron said, “I only understood the pressure of being a parent after becoming a dad, and think my parents are very noble to have a family of five children! I am okay with three or four kids, but it’ll depend on my wife too. I’ll respect her (decision).”

While he used to be happy being preoccupied with work and career commitments in the past, Aaron has realized that enjoying family life and having kids around are a great joy too.