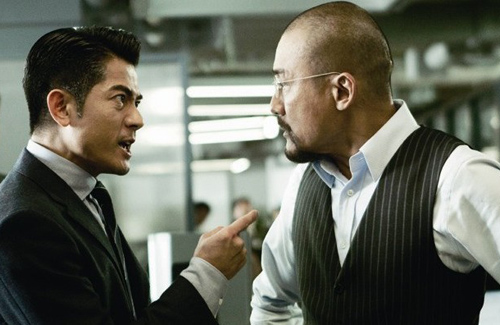 Cold War <寒戰> has been dubbed Hong Kong’s best police and gangster story movie in the past decade. The film will be released on November 8 in both mainland China and Hong Kong.  The film stars Aaron Kwok (郭富城), Tony Leung (梁家輝), Aarif Rahman (李治廷), Eddie Peng (彭于晏), and Andy Lau (劉德華) in a special guest role.

Cold War starts off with a sudden disappearance of a police van and its crew, which sparks off an internal conflict between the upper level teams of the police force. While investigating the hijacking case, the two major factions in the police force — Deputy Director Li Wen-bin (Tony Leung), a hard-nosed no nonsense cop, and the other Deputy Director, the more refined Sean Lau (Aaron Kwok), explode into major conflict due to their different perspectives of law enforcement.

During the press conference, the cast appeared on stage according to the factions they belong to. Tony’s faction includes Eddie, Andy, and Joyce, while Aaron is in charge of Charlie, Aarif, Kar Lok, and Terence. On stage, they recreated several exciting and colorful dialogues in the movies, which were unheard of until yesterday.

To create finer details for the script, the two directors had spent years collecting information on Hong Kong law enforcement agencies. At the event yesterday, Liang Lemin and Sunny Luk retraced their work and their objectives. Liang Lemin said, “In order to realize our dream of directing, we have worked extremely hard from day one. Our goal is to conceive and direct an out-of-the-box movie. Most Hong Kong police and gangster style movies are generally about police trying to apprehend the bad guys, but they rarely touch on intriguing internal police bureaucracy. What made this movie different is its focus on the agency’s politics and power struggles. It uses pictures and plot to reflect the core values of Hong Kong law enforcement and the rule of checks and balances. “

Cold War’s cast includes top caliber Hong Kong and Taiwanese actors. The movie also has a support team featuring Chin Kar Lok’s stunt team and a Hollywood team. During the conference, to commend the outstanding collaborations between the cast in the movie, the management group included an “award ceremony,” in which special Cold War medals were awarded to the main cast by their appropriate leaders. To top it off, Aaron Kwok and Tony Leung awarded each other, where the two movie kings commended each other.

At the end of the conference, members of the Hong Kong Special Duties Unit, dubbed as the “Flying Tigers,” who had participated in some scenes of the movie, saluted all the actors and directors. The actors returned a salute, gesturing the acceptance of the Cold War.

Cold War premiered at as one of the opening films in the 17th Busan International Film Festival in South Korea. Overseas feedback is positive, with the  international media holding the film in high regard. Many praised it as a new height of Hong Kong crime films.