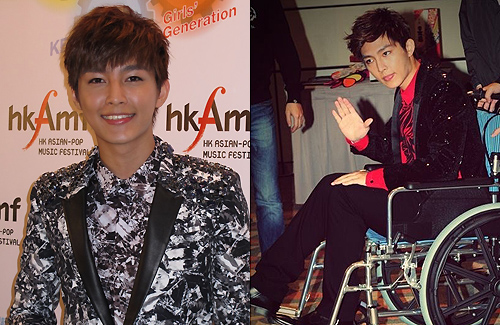 Due to a torn ligament, Aaron Yan (炎亞綸) of Taiwanese boy band Fahrenheit, has to undergo knee surgery for the third time this year, to prevent his right leg muscles from atrophying. After his surgery, there is even a slight chance that the basketball-loving 28-year-old may not be able to play sports again.

In 2006, Aaron sustained a knee injury while making the music video for “I Have My Youth” <我有我的 Young>. After tearing his ligament again one year later, he received another surgery. Aaron has been seen in and out of the hospital for medical checkups often.

In a recent medical checkup, doctors found that Aaron’s right leg muscles around the knee have already atrophied 2 centimeters. Without another surgery, the condition will only deteriorate. Busy with Fahrenheit’s promotional events in the past, Aaron has learnt his lesson not to postpone health ailments.

Aaron now spends 2 hours every day at the rehabilitation center. Aaron said,“After surgery the first two times, I did not let my knee fully recuperate. Now I have to be hardworking in my rehabilitation exercises. Not only that, I also avoid spicy food.”

At the same time, Aaron would try to strengthen his core muscles through the use of yoga to take the burden off his knee. Aaron is so dedicated towards his health that he even brought along his yoga equipment when he travels for overseas promotions. He also carries a medical ice bucket to ice his injury at anytime. Aaron joked, “The hotel is shocked at the amount of ice I requested because I use up a large amount of ice each time!”

In other news, Aaron who is a regular at the variety show, One Million Primary School <百萬小學堂>, has shown excellent results. Aaron claimed it was not intelligence, but rather instinct which has helped him ace the questions. Aaron said, “When I was taking the university entrance examination, I have relied wholly on my instinct. I do not have to strategize to do well!”

This review is written by Karen for JayneStars.com.