Ada is grateful for her husband’s love and acceptance and calls him the “perfect man’’!

Praises Husband to the Skies

Known for showing off her adoration for Max publicly, Ada praised him, “He’s good at martial arts, dancing, and singing too.” Aside from these talents, it’s Max’s genuine care that impresses her the most. “He doesn’t just love his family, but mine too.”

Max has never judged Ada’s unsavory past. Ada said, “He accepts everything I used to be. When I bring up the past, he never judges but would protect me wholeheartedly. That’s why I’m very grateful to him. He’s really a perfect man. Until today, I have to ask him about every matter whether big and small. He’s helped share my burden so I don’t need to be stressed.”

From Her Rough Childhood and Tough Younger Days to Meeting Max

Ada grew up in a single-parent family and her mother was a gambling addict. Ada and her elder brother were forced to move and change schools frequently to avoid being found by debtors. In 1991, Ada won  Miss Hong Kong second runner-up and began her career as a TVB actress. She worked hard to earn money for repaying her mother’s debts, but her efforts seemed never enough. Just when she was at her wits’ end, Hong Kong billionaire Joseph Lau (劉鑾雄) helped Ada with her huge financial burden, and even splurged a huge sum on her 18th birthday celebration. Thereafter, there were rumors that he gifted her properties worth billions of dollars (HKD).

Ada on Love and Respect; Max on “Saving Up” Every Day 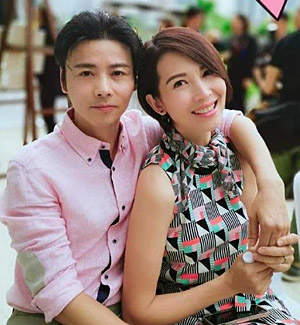 Sharing tips about a long-lasting marriage, Ada said, “We’ve been together for 16 years and have gone through what others might be facing. The most important thing about love is not to hope for the other person to change, but to respect his or her feelings. Men need respect. Women need love. He would know how to love you then.”

Max, on the other hand, had a very different take on the secret to a good marriage. Drawing a parallel between love and banks, Max shared, “Quarreling and encountering conflicts are similar to ‘spending money’. During everyday interactions, you’ll need to ‘save up’. Going to the movies, shopping, or eating at home together are like saving up. I really enjoy the process of ‘saving up’, so there would be ‘reserves’ to fall back on whenever a conflict arises. Otherwise, all your memories will be about ‘spending money’; what would you do when you’re ‘broke’?”

After the interview aired, netizens commented that Ada is able to share her past so publicly due to the security Max has given her. Many also pointed out that Ada and Anita Yuen (袁詠儀) are both very courageous in being able to face up to their past involvement with married men, and are similarly lucky enough to meet other halves with whom they are truly happy now.