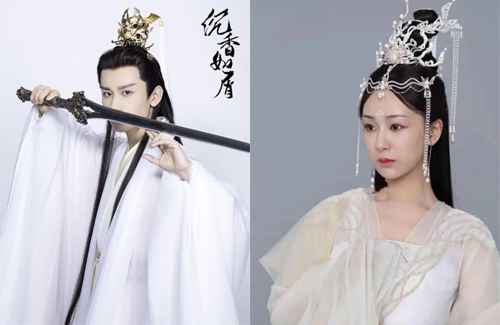 Announcing the start of filming in March, Chinese xianxia drama Agarwood Like Crumbs <沉香如屑> had previously released character stills of its main cast Cheng Yi (成毅) and Jing Tian (景甜). However, news of Jing Tian pulling out soon emerged, after which Yang Zi (楊紫) stepped in for the female lead with her imaging shot leaked.

Cheng Yi and Yang Zi were last seen together in Noble Aspirations <青雲志>. Some of Yang Zi’s fans were displeased with production firm H&R Century Pictures, which was perceived to leverage on Yang Zi’s fame to push up Cheng Yi’s popularity in Agarwood Like Crumbs, as the actress had earlier rejected the role, before agreeing to the team’s request again this year.

With the matter creating quite a hullabaloo online, Yang Zi’s studio had to issue a statement to clarify the matter and calm fans. According to the statement, the star had turned down the role as her filming schedule initially clashed with the production. When this was later resolved, she agreed to take on the role.

Still, this failed to change most fans’ opinion that Yang Zi had been pressured by the production firm to take on the role and collaborate with Cheng Yi. The saga resulted in much unhappiness between the stars’ legions of fans.

Story Intertwines Past and Present

An adaptation from Su Mo’s (蘇寞) novel of the same name, Agarwood Like Crumbs is a Xianxia work which was especially popular when released. The drama runs the angst-filled love theme see in Love and Redemption <琉璃>.

The story centers on the ancient tribe Guyi’s last surviving twin, heroine and lotus fairy Lian Yan Dan and her ill-fated romance with one of the four emperors of the celestial heavens, Ying Yuan Jun. In order to save Ying Yuan Jun, Yan Dan dug out half her heart, but Yuan Jun ends up declaring love to another and even banishes Yan Dan to the heavenly courts. Using 800 years to forget her grief, the two met again at a destined time in their present lives.

2 comments to After Casting Controversy, Yang Zi Stars in “Agarwood Like Crumbs”