Ali Lee (李佳芯) and Billy Luk (陸永) were spotted in Yuen Long’s Tai Po Industrial Estate to film their romantic comedy AI Rhapsody <智能愛(AI)人>. The scene in filming stars Ali, a human cyborg, dressed in a wedding gown and “eloping” with Billy Luk. She rode behind Billy’s motorcycle in a scene that is reminiscent to the 1990 romance film A Moment of Romance <天若有情>.

“It actually won’t be very romantic when you watch it,” shared Ali when asked about the scene. “I don’t want to spoil too much, but [the characters] feel more anxiety than romance.” 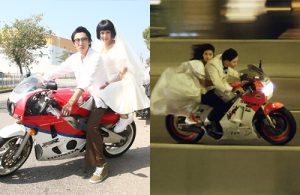 The shooting of AI Rhapsody is nearing completion. Ali said she would be able to take a few days off on Christmas to rest. “I’m already missing Billy. He’s done a lot of variety shows before, so we rarely got the chance to collaborate. He’s definitely very funny, on screen and off. We had so much fun together. I’m going to miss everyone.”